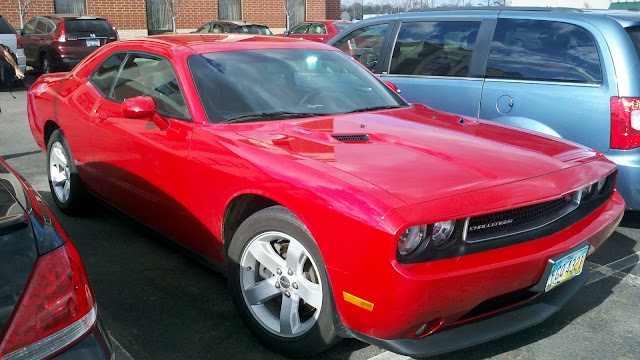 When I arrived in Columbus on Monday, the original car I had been assigned had no car keys in it.  So, I hoofed it back to the kiosk and instead, I got this HOT Dodge Challenger in Candy Apply Red with a Hemi!  It was seriously a hot car.  It reminded me of the Dodge Charger Melon Man and I had when we went to Utah for Dylan's ordination, but not as nice.  This was more of a muscle car than that one.  But, they both still went fast!

I told my co-worker, Jessica, that I could not wait to get it out on the open road and put the petal to the metal.  I must have been being watched over though as that whole first day, the only time I actually got to "GO!" was 1/4 of a mile from our hotel and I was at the front of an intersection.  Bummer!

But, the next morning came and we headed out on the freeway to the office and I let her rip.  As soon as I had a clear view of about the next 2 miles and the road was straight, that was it.  I was gone.  We hit 90 miles an hour and it didn't even feel like we were above 65.  It was awesome.  We made it to our exit so quickly that I was actually sad!

Sadly, today, it was rainy and so it wasn't safe (not that it ever really is) to lay it out and go.  Oh well.  It was probably for the best.  I don't admonish speeding or breaking the law to do so.  But, this one time, I just had to try it out.  I surely did not want to get a ticket though!