Today, for a team building activity while in Columbus, we went to this pottery studio called Clay Space.  We were going to be painting some pottery pieces and then fire them while we were there.  I saw this nifty piece and thought it would make a nice decorative piece, so that's the one I chose. 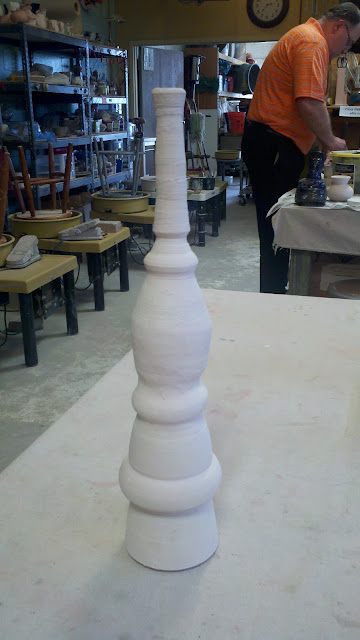 Here are some of my co-workers (Maria, Jessica, and Jason) working on painting their pieces.  I think I need an iPhone - the quality of those pictures are WAY BETTER than mine. 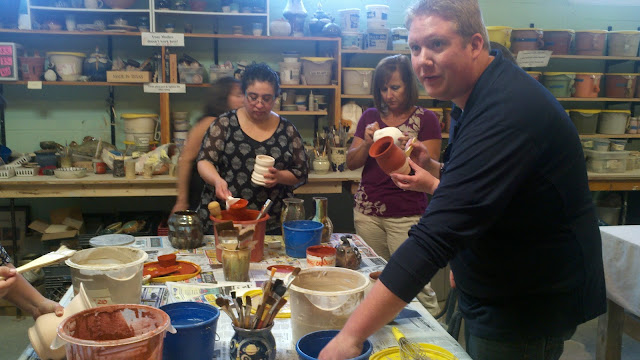 This is David working on painting his vase. 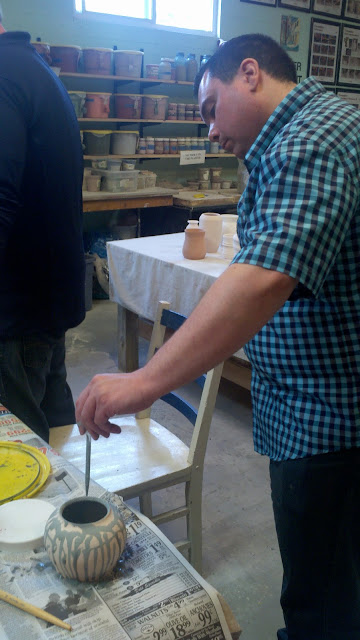 The anticipation and the concentration... 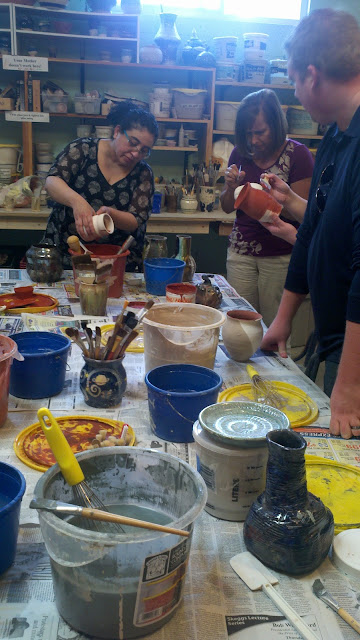 Once all of our pieces were painted, they were placed in the kiln. 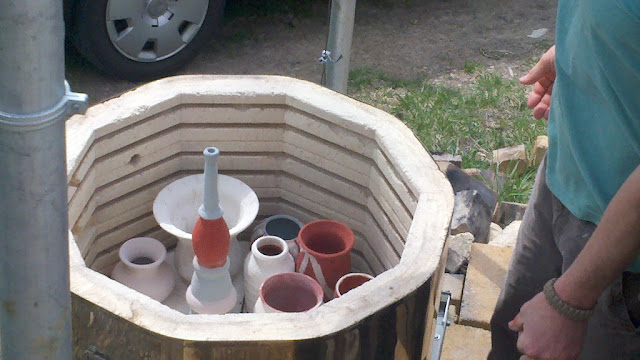 The kiln needs to get up to 1900 degrees for the technique to work properly. 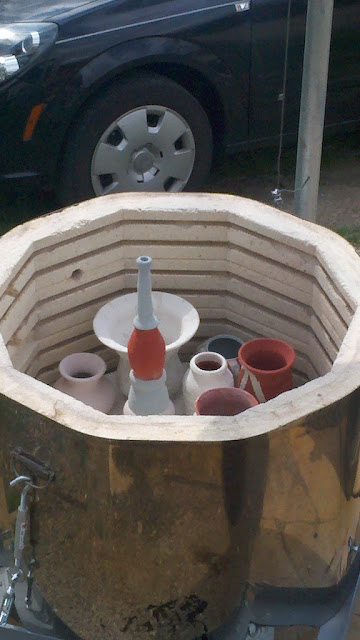 Once the kiln is fully heated, the worker opens the lid and moves quickly to remove the pieces from the kiln. 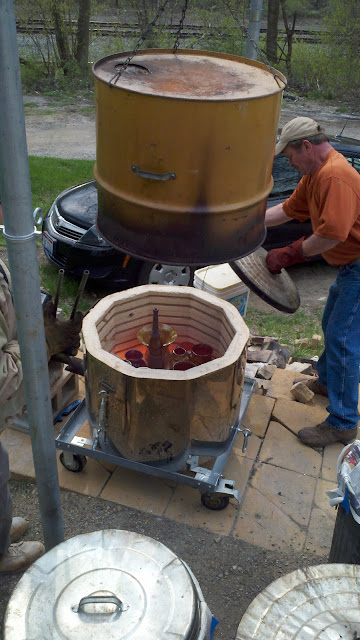 They put the piece into a garbage can that has been lined with newspaper.  There is something about the newspaper and oxygen that does something to the hot paint and creates the "art" on the piece. 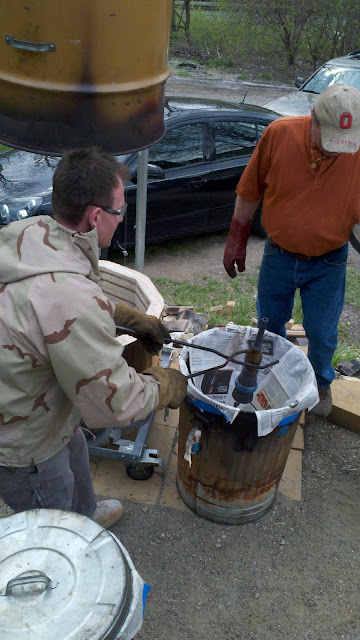 When the piece is first put inside the can, it is so hot that it instantly catches the newspaper on fire. 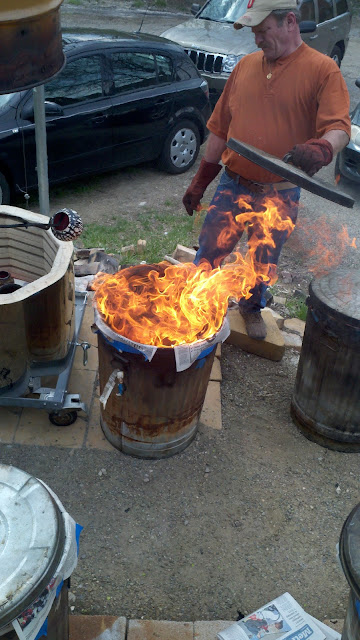 They hurry and place the lid on the can.  Here they are putting another piece into another can. 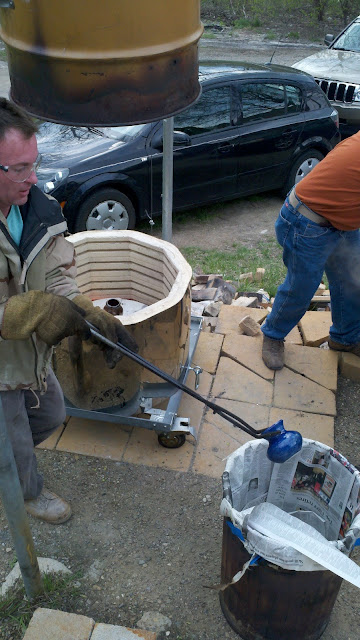 We had to wait around for about 90 minutes while the pieces cooled in the cans, so we went outside and this is the "mural" that is painted on the side of their studio.  It actually looks really neat in person. 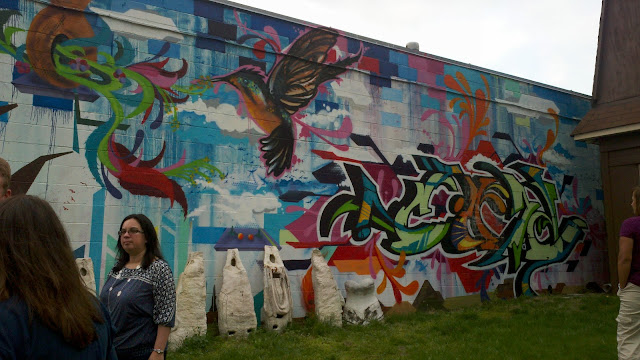 There is also this cool old building next to the studio where they build sets for movies. 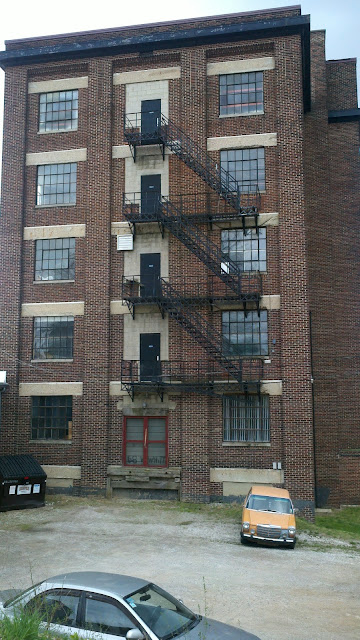 It was finally time to take the pieces out of the cans.  As you can see, all of the small pieces turned out pretty cool.  They were all painted with metallic paint and that's how they turned out.... 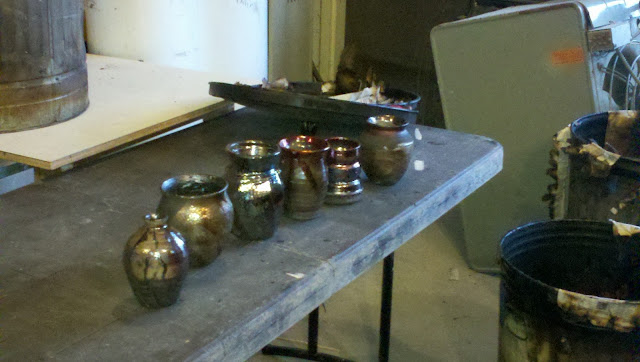 ...but, when you look at mine, it is SO UGLY.  It didn't go metallic at all!  It's an awful gray color.  It's supposed to be red and gold and blue.  But nope, it's awful!  I was so sad!  A creative thing for me to do and then it fails.  Epic fail to the max.  I asked why it didn't work and they didn't know.  But, I personally think it's because the kiln was supposed to get up to 1900 degrees, but it only got up to 1700.  And, the fact that my piece was really thick, versus the others not being thick - well, I bet that's it. 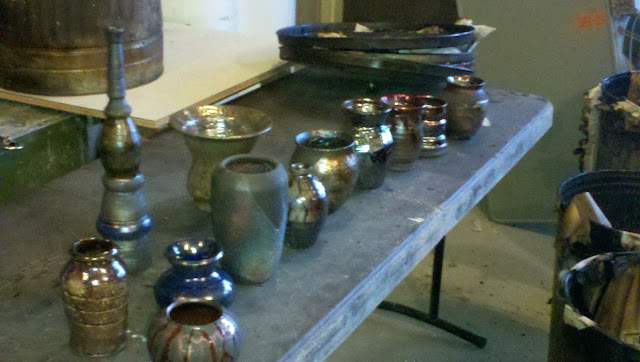 Update:  I had left my piece in the car overnight because I knew I was taking it in to work the next day to be shipped home so I wouldn't have to carry it on the plane - especially since it looked like a bong.  Well, I got into the car the next morning and it was broken!  The neck at the top had broken right off somehow. Oh well, I'll just glue it back together and re-paint it whenever it arrives.

Update #2:  My piece of "ART" finally arrived on May 1st.  It was broken even more.  Not from being damaged in shipping, just from being fired or whatever.  I kept it on my desk at work for about 10 days saying I was going to take it home and glue it together and repaint it.  Yeah, didn't happen.  I finally decided it just wasn't worth it and tossed it.  :(