What a great time I had this past weekend! The only thing missing was Clint. I know how much he would have loved to have been there. I swear, if we could afford it, we would probably live in California. We both are just drawn to the ocean. I'm deathly afraid of it, but I still love it. Could be that I grew up there for the first few years of my life and so it's just engrained in me. I don't know.

Lisa, Auntie Sigie, Uncle Ward, Flat Stanley, and I left my house around 7/7:30 a.m. on Thursday morning. We hopped right on the 303 and headed to the 10. Off we went. Before we knew it, we were in Palm Springs and as you will soon see (when I download my other camera), Flat Stanley was very excited to see the windmills! However, we were SO busy all weekend that we rarely (unfortunately) got many pictures of him participating in all that we did.

When we arrived, we first stopped off at the guest bungalows in Coto de Caza to drop off our stuff and make room in the car for Jennifer and her stuff. The bungalows used to be a

hang out for John Wayne, the famous actor, and his friends. They are now guest lodges for visitors in Coto, etc. It's like a little condo. There was a pull out couch in the living room, four hide-a-beds in the downstairs closet, and then 2 full/queen beds upstairs in the loft with another 2 hide-a-beds in the upstairs closet. Thank goodness we didn't fill all of the beds! That would have been very cramped! But, luckily, Jan, the owner gave us an adjoining room for Auntie Sigie and Uncle Ward (for free!), so it was a lot more roomy for all of us.

We headed up to Cindy's and when we got there, Natalie was having her hair done for her bridal portraits. It took a LONG time. Then, she hurried and did her makeup and by 5:30 (when we were supposed to be there) we were at the Newport Beach temple. I stood close by the photographer when I could and tried to capture a bunch of pictures with my Miss Fancy Pants camera. It was SO freaking hot and humid though. It was almost 100* and the humidity was up a lot so I was sweating like a pig. After we finished at the temple, we went to Heigler Park beach in Laguna for more pictures. I wanted to walk down to beach to take more pictures since this was my first time taking sunset pictures with Miss Fancy Pants, but I had done something to my heel and it was so sore that whole day that I could barely walk so I stayed up at the top of the cliffs. I can just say though that I LOVE my telephoto lens! I was able to take pictures of Lisa and Jenn playing in the ocean and it was as if I were close by. I wish I could have taken pics of Robert and Natalie too, but I knew I just would struggle to get down the stairs and then back up them because of my foot.

So, anyhow, here are some of my favorites of the pictures I took. 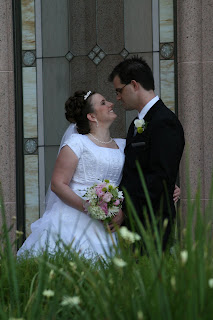 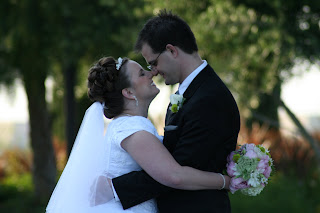 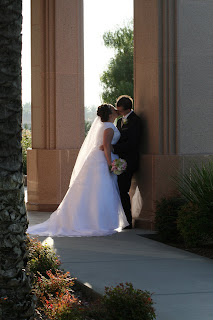 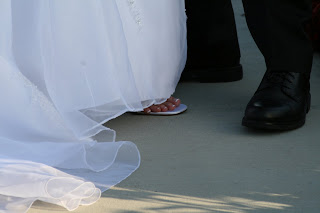 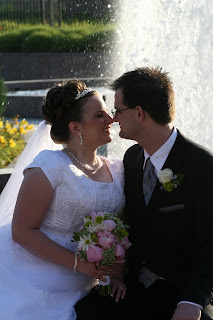 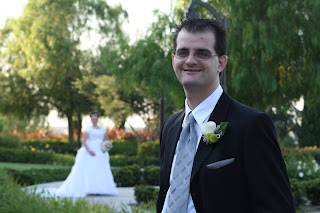 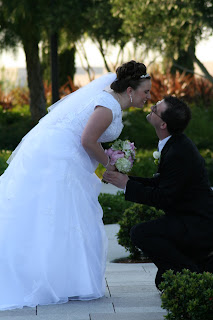 After we finished at the beach, Cindy, Robert, and Nats headed home. Lisa, Jenn, and I stopped and got gas ($4.57 a gallon - just point a gun and take my money, why dontcha?!), then stopped at the Wood Pit (Wood Ranch Grill) as Lisa calls it and had some dinner. We were SO HUNGRY! We had the Prime Rib salad with a side of asparagus. Talk about yummy. I could have gone back again...especially for those rolls! We headed back to Cindy's and picked up Lisa's parents, then went to the bungalow to go to bed.

On Friday morning (Independence Day!!), Lisa, Jenn, Christine, and I headed off to Long Beach airport to pick up Taylor who worked some special magic with a neighbor's buddy pass to come in as well. He was so cute - Mr. solo traveler! I can't believe my Tato Bug took his first solo flight. I couldn't tell if Jenn was petrified for him to be alone or not, but she didn't really show it if she was. Christine was so excited for him to come! After we got to Cindy's, a lot of the family went to Duff's friend's house and we swam in this resort like pool. The kids had so much fun and a lot of us got some sun(burns). Then, we headed back to Cindy's for dinner. Robert's parents arrived and joined in. It was certainly a housefull! We left to go back to our bungalow just as the fireworks were starting to go off and so it was fun to see a few fireworks celebrating our freedom.

Saturday was the BIG day! Up and out the door by 8:30 a.m. We didn't have to rush at all. We arrived at the Newport Beach temple with time to spare, see Nats, and ponder for a few minutes before heading in for the session. It was so great to be there for this special occasion. It was the perfect day. I loved being able to be with family in this sacred house of the Lord. It would have been even better if more of the family could have been there (especially Natalie's dad - his recommend expired 5 days earlier and he didn't realize it!), but there were other things going on that caused people to either not be able to be there or to make choices to not be there. I was so very glad to have my own sister there with me, even if she didn't get to sit next to me in the temple, as well as to have my cousins and aunt with me. I cannot wait for our new temple to be built so I can go there frequently. It is definitely just the best place on earth - so peaceful, calm, and tranquil.

After the temple, we went back to Cindy's again and Duff bought Panda Express for everyone. Then, we got ready for the bridal shower and all the guys left to go to a movie and dinner. Lisa, Christine, and I sang hymns around the piano after most of the work was done and it leant a nice spirit to the afternoon. Then, it was time! Time for the shower! People started to arrive. There were about 20-25 people there. All close friends and family.

Everyone brought a gift that pertained to a tradition that they wanted to pass on to Robert and Natalie. My gift was an idea that Clint came up with. I was so impressed that he thought of it! I made them a brand new 12 Days of Christmas flipchart. I started off describing my gift by saying that this tradition was at least or about 40 years old. I looked over at Auntie Sigie and she kind of had a puzzled look on her face. Then, I proceeded to tell how when I was a little girl, I remembered that Uncle Ward, Natalie's grandfather, would lead the entire family that was able to be together in singing The 12 Days of Christmas on Christmas Eve. He had made this flip chart that had drawings on it of each of the symbols representing the 12 Days. I looked over at Auntie and she was tearing up. I told how once Auntie and Uncle Ward had moved to Arizona, I had asked them about the flipchart and they found it in their garage and started bringing it with them to our house on Christmas Eve and we would still sing the song every year. In the last few years, it has gotten more and more ragged and torn and has all kinds of tape all over it now and last year I wanted to make Uncle Ward a new one for a Christmas present, but I was told that the old one was tradition and it would continue to work just fine. So, then I told Nats that it was time to start this tradition in her own new family so I had made she and Robert their very own 12 Days of Christmas flipchart. She and her mom opened it up and showed each page to everyone. It was so nice to see how much it meant to them and to Auntie. We showed Uncle Ward when he got home and he was very touched. Here are the pictures of each page: 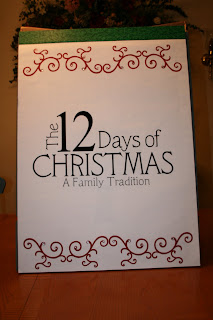 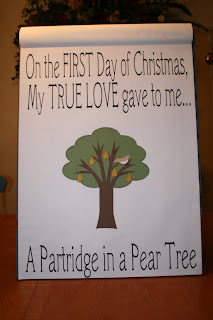 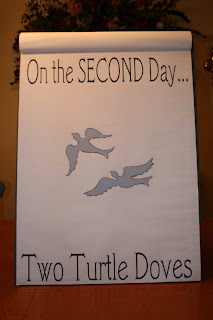 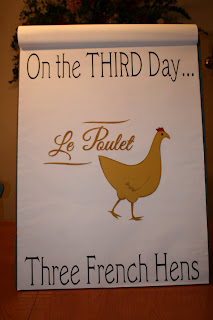 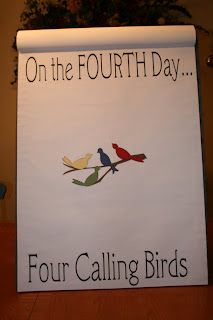 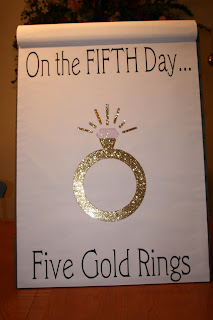 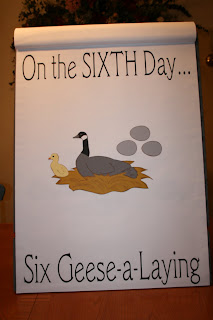 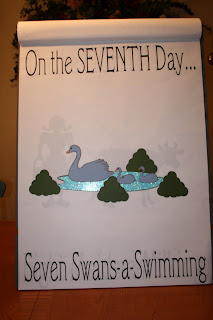 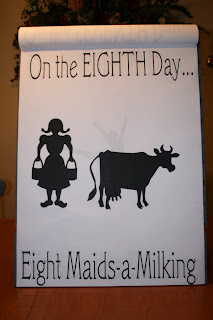 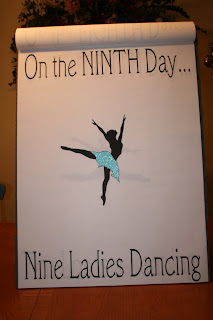 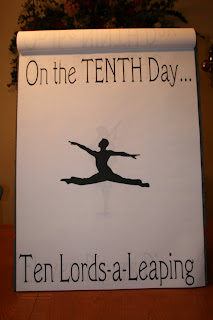 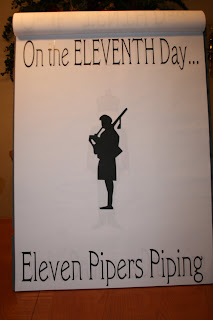 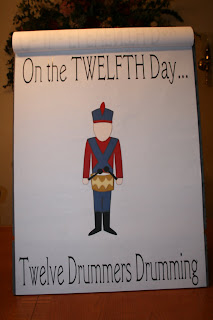 The shower lasted until about 11 p.m. and then a bunch of us sat around and talked for a little bit. By the time we got back to the bungalows it was after midnight. We were EXHAUSTED. We all climbed into our beds and went to sleep. The next morning, we all kind of woke up about the same time - 10:30 a.m. - and freaked out that it was so late! We all jumped up, started getting showered and packed and then took Jenn and Taylor back up to Cindy's and then headed out for home after stopping to get some brunch at Taco Bell. We made good time and were home by 7-ish. It was so great to be home with Clint and sleep in my own bed. It was just so hard to get up at 4 a.m. this morning!!!

You recapped it beautifully! Thanks again for ALL your help during the weekend. Couldn't have done it without all of you!

Sounds like you had a great weekend! I love the flip-chart...it is beautiful!

Wow what a weekend. Glad everyone had lots of fun.