Let me start by saying (much to the chagrin of most people), that I am NOT in favor of the New Year holiday. I think it's pretty lame that we get a day off of work to celebrate the fact that it's the first day of the new year. And, to that end, I think New Year's Eve is pretty lame too. I would much rather work on New Year's Day and have a day off in March when it's been a long time since my last day off (MLK Day) and it's still a long way until the next holiday (Memorial Day). But, alas, I am only one person and nobody listens to me so New Year's Eve it is and once again, I will be off tomorrow (not that I don't LOVE having a day off!). 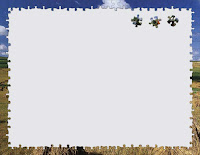 What are we doing tonight? Nada. C has to work tomorrow so he's in bed already. I'm trying to carry on an old family tradition. We used to buy my dad a 1000 piece puzzle every year for Christmas. We would always work on it on Christmas Eve and Christmas Day. He was awesome at putting puzzles together. He could find any piece he was looking for in the puzzle box, just by flipping a few over and looking through them. My mom, on the other hand, would try all 999 other pieces just to see if they fit with the one piece she was trying to connect to. She would turn them this way and that, jam it in, then say it fit there. As time went by, there would always mysteriously be a piece that was missing and it was always that piece she's jammed in somewhere.

I guess I'm like my dad when it comes to puzzles. I love them. In just about any shape or size. I've even done a three dimensional one before of the Empire State Building. Well, at work yesterday, one of the agents was doing a puzzle in between calls. I asked if I could borrow one of hers to do on NYE. I decided on the way home to stop at Big Lots (where she'd gotten hers for cheap) and see what they had. I bought three. I was so excited to do a puzzle with my honey for a little bit tonight....until he told me he hates doing puzzles. So, for the last couple of hours, I've been sitting there doing it myself. It is kind of hard. The box is small and although it's only 550 pieces, it's complicated and the entire picture is not shown on the front of the box so you really have to work at about the top 1/5 of it. I'll get it done though. That's just me. I can't not finish a puzzle!

Well, I'm off to finish off the bottle of Martinelli's (love the apple-grape and the apple cranberry!) I opened a little while ago and to work on my puzzle some more. Here's to ya. May this new year be a bit brighter economically and may you have love and peace in your homes and families.