You know what else bugs me about New Year's? It's quite alright for people to say "Happy New Year!" but it's not okay for people to say "Merry Christmas!" or "Happy Hanukkah!" during their season. We all are requested to say "Happy Holidays!" to people so not to offend them. It's just not right that the first day of the year gets a cheerful greeting denoting it's true day, but the religious ones don't. What's up with that? It's so wrong. 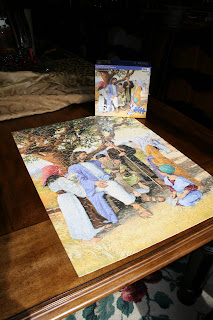 C had to work today. About all I did today was finish my puzzle and then do another one. I've been suffering from some pretty bad depression lately and I just haven't felt like doing anything. This was about all I could do. I would work on the puzzle, then cry, then work on the puzzle, then cry. C tries to understand, but even I don't understand what's fully wrong with me so I just try to deal with it. 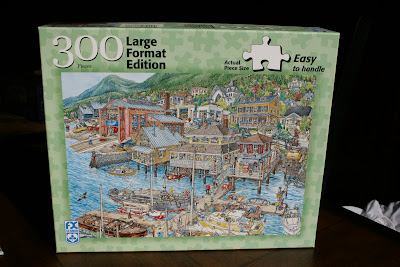 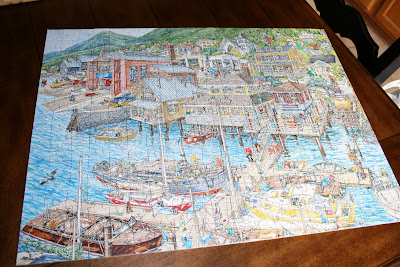 This second one was so much easier. I actually got it finished in less than 2 hours! I think I need to head to Big Lots and see if they have anymore of this kind. I really like them. I looked the brand up online and they have one called "Get Hooked" and another one called "Winter Dawn" that I would like to get.

Let's see...what else did I do today? Oh, I folded underwear. My mom always taught me to fold clothes perfectly. I love it when the stack of clothes come out folded exactly the same. It looks so nice.

I tried to buy a scrapbook kit online, but the rest of the world was trying at the same time, so all I kept getting was errors. Boy, did that issue cause a fiasco for the company!

That's about it. It was a pretty lazy day. Have to work tomorrow - am manager-in-charge for the day. Then, it will be the weekend again! Thank goodness.

I love the puzzle choices! We love to do puzzles! Have you seen that new puzzle thing that's out? I'm trying to find one for us. It is a black felt-like cloth to do the puzzle on. If you don't get it finished--no worries! Just ROLL IT UP (!) on the black cloth. It stays right in place and then put it in this tube that comes with it. When you are ready to do some more, just pull it out and unroll it. I've heard you can find it at Target/Walmart, but I've not had any luck yet.