Another Stake HFPE to Report On

Back in May of last year, I blogged about my night at the Stake HFPE. Tonight, I went to another one...and who would have thought it could get worse than last time? But, it did. Seriously.

Upon arriving, we were asked to "sign in." Huh? Why? So those who didn't show up could be chastised for not coming? Yeah - believe me - it probably will happen. If not for that reason, then why? Really.

As we walked in, in our Sunday dresses as requested/required, we could see there were NO tablecloths on the tables. NONE. Not one. Oh wait, there were some plastic lime green ones on the serving tables, but none on the tables where we were to eat. Okay, so we were about 10-15 minutes early, but seriously, this part should have been done a long time ago. But...we soon came to find out that this was the way it was supposed to be! Seriously (man, I love that word lately!), I do NOT want to put my plate of food and my clean silverware down on a table that someone may have changed their baby's diaper on! I wanted to gag.

I sat down with a bunch of ladies I knew and we were visiting. We decided to sit at the table closest to the overflow portion of the chapel so we'd be close when we moved into the chapel later (like last time). So, we're visiting and we look over at the food tables and this time, there are big electric roasting pans - the kind like a crockpot, but on a huge scale. We're all like, "Yay! There's actually FOOD this time!" (Yeah, right.)

Soon, (I think it was) the Stake RS President gets up and starts the meeting...all the way down at the stage end of the Cultural Hall (so we couldn't see her). She explains that there are no tablecloths for two reasons:

1) She didn't want to have someone have to wash all of them (buy cheapo paper ones then so they can be thrown away - at least cover up the baby diaper butt-encrusted tables with SOMETHING!). My mother, auntie, and cousin would have lost it if they'd seen that!
2) We're doing a service project after we eat (Huh? That was never on the poster, etc).

So, we have a prayer and everyone gets up to go dish up. Okay, sisters....there are FOUR long tables, with two sides each. So...if I do my math right, that means EIGHT lines, right? Why on Earth then, are there two huge lines stretching around the cultural hall - one leading to the first table and the other leading to the fourth table and nobody is going to the 2nd and 3rd tables? The ladies at my table and I just sat there in utter amazement. Finally, someone said, "just walk up to those empty tables and get some food." So, we did. I'm sure there were chickadees in the lines that were ticked with us, but if they were not smart enough or paying close enough attention when the announcement was made that there were 8 lines, that's not my fault.

So, we go up to the table to get some food. We open the lid to the roaster and hmmm...there's fried chicken inside. Wow! Someone must have said something about adding meat after the last time. However, our fried chicken had apparently either been fried for 3 days or it was fried chicken that had been sitting there for 3 days. It was so dry, so bland, so almost burned, and so awful that most of us couldn't eat it. I picked as much halfway decent meat off of mine that I could, but it was just so bad. 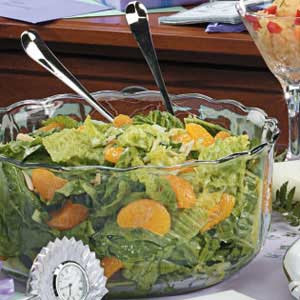 The salad was disgusting. It should have looked like this picture, but it definitely didn't. It was just spinach, some mandarin oranges, slivered almonds, and feta cheese, swimming (truly) in a (fat-free, I'm sure) raspberry something dressing. The combination of the feta cheese and the gross dressing smelled like super stinky feet. It was so gross that everytime I tasted or smelled it, I wanted to vomit. If I was able to get a few big clumps of the feta in my mouth with it, it wasn't as bad, but it was still gross. I only ate it because I was starving after not having eaten all day. I should have just left and gone to Sonic or Subway or something, but I didn't.

Then, of course, there were some raw baby carrots, the obligatory roll, and a tiny square of sheet cake. The roll was DE-LISH (but can you really mess up store-bought rolls?) and the cake alright. (Heavenly Father - you did an excellent job on the raw baby carrots...thanks!) The main parts of the meal though....uck. Seriously (there it is again!), who thinks up these meals? I guess the "thought" of "chicken," a salad, carrots, a roll, and cake seems okay, but when one determines which kinds of these items to put together, ew.....how did they not realize this combination was horrible? Even now, as I write this (two weeks after the fact), my face is contorting and making these very odd, sickening looks. Yuck.

So, after the meal was done, we assumed we'd be going into the chapel like last time for a "spiritually uplifting" talk. Wrong. We sat at our baby diaper butt-encrusted, now food laden tables and listened to this husband and wife service missionary couple talk about 1) relationships (I think) and 2) hmmm...I'm not sure what the second talk was about - I just couldn't follow what the wife was saying other than when she essentially said something about our obligation to have babies rather than work, do everything for our husbands, etc. Tell me I didn't feel angry at that one! I wish I could remember exactly what she said, but I don't now. Oh yeah, and we couldn't see them either so it was hard to stay focused.

Then, after the "talks" were over, we were told it was now time for our service project. We were going to make these fleece beeny hats. I have no problem doing such a project, but did we really have to put on a dress for this? I'd been in work clothes all day and now I had a dress on - to "craft" in? Oh wait - we weren't "crafting" - we were serving - so it's okay (hmph!).

It was just a horrible night. After the first time back in May, I really doubted I would go to another one. But I went this time because:

1) I felt I really needed to go to Stake HFPE night,
2) I wanted to feel the Spirit there like when we all sang Love At Home last time,
3) I wanted to see my friends, Denise and Casey, and some of the other ladies,
4) I didn't want to miss out on something wonderfully spiritual and uplifting.

However, this one solidified it. I will likely never go to another Stake HFPE in this stake again - at least for a long while. I mean, what is so hard about serving an appetizing meal, putting tablecloths on the table whether they have to be washed afterwards or not, and having a lovely spiritually uplifting night? This was anything but. And I wasn't the only one who thought this...it was amazing listening to the ladies as they left that night. They were disappointed too.

For the next one, if there is not some "theme" or information about what we'll be doing or talking about or whatever, on the posters/announcements for it, I will not be going. That is how the posters/announcements have been the last two times - no information at all other than the date and time. I think they really don't have a plan for what they're doing until a couple days before, so that's why they don't add any of that kind of info to the posters. Maybe if they added a little something enticing, it would excite the sisters to come. I felt really bad for those sisters who drove in from Wenden and Salome. That is too far to come (over 100 miles each way - about 3.5 total hours of drive time) for something like this ended up. Sorry it was so disappointing. Add me to the list of people who are grossed out by no tablecloths. Better be careful, you might end up in charge! Love You!

At ours you sign in so they know who didn't get the folders and flyers, and all the great information they hand out. No chastising!

Even some taped butcher paper would have been better than nothing!

Jenn's right--be careful, you might be in charge next time!