The big party day finally arrived and after working with Holly to get the house cleaned, I hurried and shredded 2 heads of lettuce and 20 tomatoes. Raced over to Lisa's to help her fry tacos and she was already on a roll and said she didn't need me to help. So I visited with her and Cindy. She ended up frying 160 tacos! Holy freakin' ka-mo-ly! Ay, caramba! They were excellent, as usual. 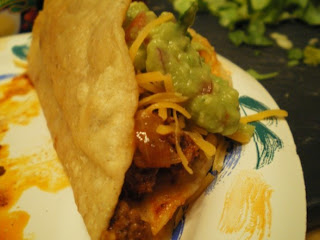 Tacos are a staple and a party tradition in our families. We all cook them the same way and most of the time we all serve essentially the same condiments for them...lettuce, tomatoes, cheese, refried beans, and the secret recipe homemade taco sauce. Most of Lisa's family offers sour cream and guacamole as well. My family usually offers ranch dressing instead of sour cream. That one developed about 20-25 years ago (sheesh! Really, it's been that long????) Either way, they are awesome!

Everyone has their own way of putting their tacos together (the condiment portion). I used to always put taco sauce on first, then ranch dressing, then tomatoes, cheese, then lettuce on the top. Everyone thought I did it backwards. But I thought it was better because all the good stuff was inside rather than falling off as I ate the taco. I would hold the taco over the beans and as the excess taco sauce and ranch dressing dripped out, they would drip onto the beans and add more flavor to them. After marrying C and making tacos for him, I learned that his way of eating them is also very yummy and have actually migrated to that version when possible! He just adds sour cream, cheese, and onions inside. Then, sprinkle a little salt on the outside and chow down. He can put away 12 tacos, easy. I think it's because he doesn't have all the other stuff on them because all the missionaries that have eaten them at our house have only ever been able to down 8 at once. Plus, C doesn't partake of my yummy refried beans.

C came after he got off work. Lisa and Craig were there. Auntie and Uncle Ward, Cindy, Meredith and Josh, Adrianne and Mike surprised Auntie and arrived yesterday so they were there too, then friends Arlene and Debbie, Noel and Beverly, and Gwen and Bob all came too. It was a house full of family, friends, and food. After dinner, we gathered around the dining room table and played Nertz and Apples to Apples. What a riot! We were just laughing and hooting and hollering. It was so much fun! 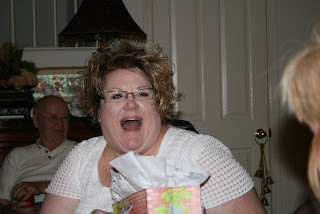 Then, dessert time. Beverly had made two cakes and by the time everyone had partaken, they were almost gone. 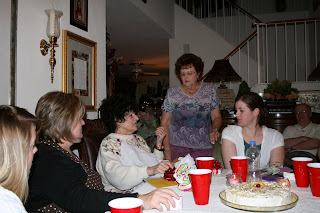 Auntie opened her gifts and of course, she couldn't have a picture taken without closing her eyes! Beverly gave her a subscription to Food Network magazine. 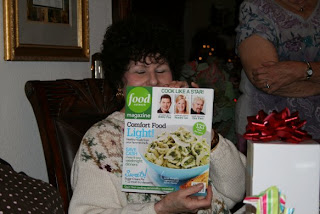 C bought her a desk calendar based on the "Maxine" comics (you know...that old crotchety lady...which Auntie definitely isn't!) and I got her the movie Mamma Mia! 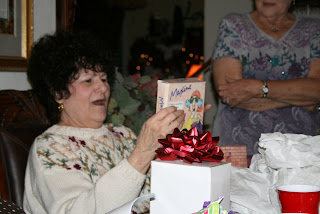 What a wonderful time being with family. Oh...and tomorrow it's time to party again...we're going to celebrate Adrianne's birthday!!

Mom used to do that whole drip the sauce over the beans thing and it drove me crazy!

I love to drip the sauce over the beans too. That's the way my dad always did it. Maybe we all picked it up from him.

My take on condiments: cheese first (it gets a little melted), taco sauce, lettuce, tomatoes, avocados, then beans. We don't do any sour cream/ranch. When did that start! I didn't get the memo!