Martin Luther King day rolled around again today. I have no problem honoring this man, but gheesh...do we have to do it so close to New Year's and Christmas? Why not in March or something?

I was home alone all day because C had to work. It was nice to just be peaceful and quiet. I started working on a small new puzzle - only 300 pieces. It looks like a Thomas Kinkade painting, but it's some other artist. I didn't do much else. In fact, I slept REALLY late - 10:45 or so. I guess I just needed it.

I have really been being prompted lately to work more on our food storage. C and I really need to go through all we have and organize and log it all so we know what we have and what we don't. I've added a little list to the right side of my blog of the things I've started getting since the beginning of the year. It's not a very long list, to me anyway, but we are really still only 24 days into the year so maybe it really is a substantial list for such a short amount of time so far. I want to keep adding to it as we get more during the year. We have a bunch of items up at Dad's and Jennifer's houses in Utah - but what good would that do us up there? We need to find a way to get it back down here and then find a place to store it here in our house since we don't have a basement, nor can we store 98% of it in the garage.

Harmon's and Macey's (stores in Utah) just had a really good caselot sale the last two weeks. I had Dad go get us some more things, including a 55 gallon water barrel to replace the one of ours that got a gash in the bottom and now has to be disposed of. I still want to get at least 2 more big ones and then two smaller 30 gallon ones.

Funny story...last year sometime, I apparently forgot to pay (honestly) the water bill for 2 months. They came and shut our water off with no notice. C had to go to the store to buy water - YET, we had 110 gallons of it outside in the garage and TOTALLY forgot! How's that for being prepared? Maybe it was okay because that water is meant to be used in an emergency and although this may have seemed like an emergency, it really wasn't. So, yeah, it was okay.

Back to the whole caselot thing...Here in AZ, they don't know what a good caselot sale is all about. They think that putting 8 items on sale for 10 cents less than normal price and then selling a case of it at that price (whether you buy 1 item or a whole case of it) is a good caselot sale. They obviously need some LDS people running their marketing departments when it comes to caselot sales.

I remember when I worked for Macey's when I was in college. Yes, a LONG time ago - in fact 20 years ago. REALLY? Twenty years? Argh!!! Anyhow, we were doing caselot sales then and they were phenomenal! We would set up a chainlink fenced "store" out in the parking lot with a tent cover for shade and there would be tons of cases of items that were heavily discounted and you bought them all by the case. Back then, people would spend $200-300 at a time and walk away with cases and cases of items for their food storage. That much money wouldn't get you as much nowadays, but it could still make a nice dent in your storage list. I wish they would do that kind of a caselot sale here, but they just don't. So, I guess we will either have to join CouponSense again or do something similar or else drive to Utah twice a year to go caselot shopping! 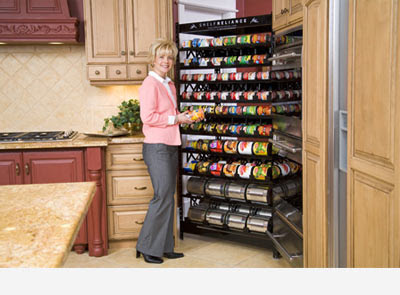 Isn't this canned storage rack awesome? I would love about 10 of these if I had the room for them (But who really puts them in a doorway like this?). They are about $300 each though and I have no room for them so I guess I won't be getting any of them. When "the" Becky Higgins had her new house built, she ended up with a room that had plenty of room for food storage and she had some awesome rotation shelves built. I'm so jealous! Here's a pic of a little bit of her room off in the distance. If you click on the pic, it should enlarge so you can see it better. 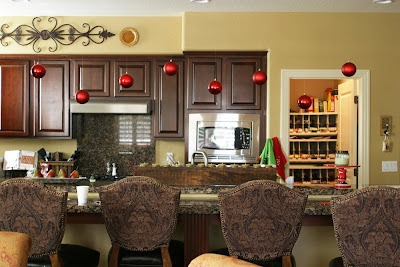 That was about it for my day. Just a pretty slow, quiet day....now....I wonder how tomorrow will go with the inauguration and all....I guess only time will tell.

Yes indeed, the promptings are coming. I was at Macey's the other day and they were having their case lot sales and people had their carts loaded. Wish I could afford to do that. But hey, a little at a time is better than nothing at all.

Keep it up on the storage. You're doing great. A little here and a little there and it adds up before you know it.

I lament that Calif doesn't do 'proper' caselot sales either. The stores just don't get it here when it comes to that. They might be surprised at how much they would make!