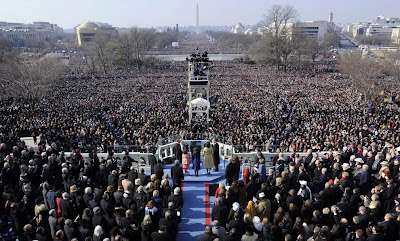 Today was an historic day. The first black American President was sworn into office. Although I am not happy about the man that it is, I am happy that our country has finally surpassed so much of the bigotry and hatred of the past. C and I were unable to watch the inauguration as it happened, but we DVRed it and watched later tonight after we got home from work. It was interesting - the pomp and circumstance - that occurred. It was interesting seeing all the "falsies" there - people who are rich and in control and pretend to do what's best for the country but probably have more skeletons in their closets than a cemetery. It was interesting looking at people and wondering just how much information some of these people have that can't be shared with the American people. I love the National Treasure movies. They spur on all kinds of secrecy theories and I'm sure some of the things in them are true. I just watched these people and wondered if any of them were involved in some of those things. But...back to the new President...I wondered if he would be able to lead our country out of this despair that we are in and bring us back to a strong and powerful nation. I fear that we will only go further into despair both financially and spiritually. Only time will tell. 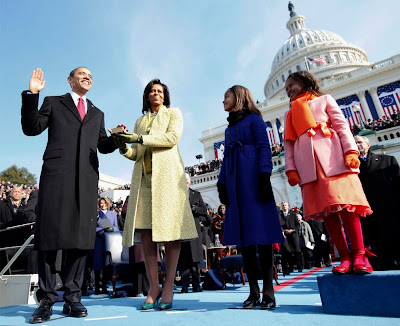 Michelle, his wife, did look radiant though in her beautiful green dress! I wasn't so keen on the pink, orange, and fuschia outfit that Sasha wore though. 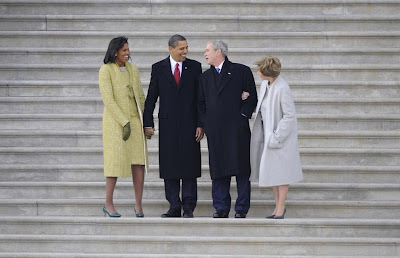 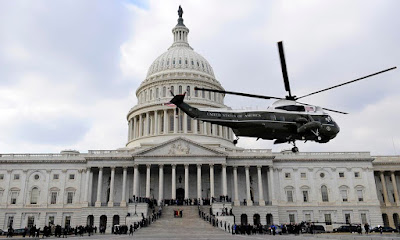 After the inauguration was over, they showed former President Bush and Mr. Bush flying off into "the sunset" (even though it wasn't sunset yet) in one of the Marine helicopters. It was kind of odd wondering what he was thinking as he flew off but C and I decided he was probably thinking..."Man, am I glad that's over with. Have at it Bub."