My Heart is Full

Today after church, C and I drove down to Ahwatukee - about 50+ miles away from our home. We went to go see C's Uncle Gene who is temporarily in a rehab/convalescent home. He has been having some health issues over the last couple of years and has really gone downhill quickly. He recently went to get up from a nap on the sofa and when he did, something popped in his leg. Apparently, the cancer he has has left him susceptible to areas of his bones becoming very brittle and easily broken.

When we first got there, the nurse was just finishing helping get him back onto the bed from being out in the patient lounge. We began visiting with him and he acted and looked at us like he knew us, but after talking to us for about 10 minutes, he said, "Remind me of your names." We told him and he looked a little like he was searching his memory and then all of a sudden he was like "Oh, now I remember." He looks so much more frail and old than when I first met him only almost 4 years ago.

I sat and visited with Uncle Gene, one on one. He proceeded to talk to me about death. (Why me? I'm essentially still an outsider here. I've only known you for 4 years. Surely this is something you'd rather talk about with your wife or brother or such, right? But, looking back, I feel honored that he felt comfortable sharing his feelings with me.) He told me that he had come to accept that he was getting closer to death and that if it be the Lord's will, then let it be done. He also said if it weren't morally wrong, he would just take a pill and go to sleep; he was ready.

I was a little taken aback by this conversation and didn't quite know what else to say. We talked a little about my mom and how she suffered for so long and how she was ready to go, too, before she died.

Soon I saw C walking down the hallway with a man and a woman with two kids in tow. This must be C's cousin, Lary, and his wife, Teri, and their grandkids, Olivia and Landon. C hadn't seen Lary in 30 years. What fun people! Very welcoming! We visited with them and we visited with Uncle Gene some more. We all finally decided to head out. Before we did though, we took this picture of Uncle Gene, C (babe, you need a haircut and goatee trim!), and Lary. 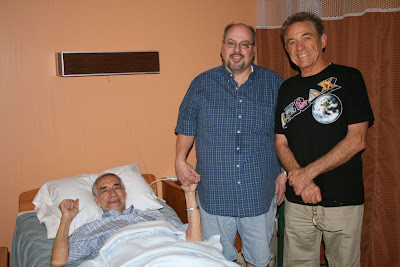 It was a very sweet picture. All of them smiling. C holding his uncle's hand. Then, the strangest thing happened to me. I finished putting my camera away and as I turned back toward the bed, I thought I saw C on one side of the bed and Lary on the other and for a split second it appeared as if they were getting ready to give Uncle Gene a blessing. But, then I realized that that was not what I was seeing. It took me a moment to remember that Uncle Gene is not a member of our church and he probably does not know about Priesthood blessings. I almost suggested it to C and Lary, but I didn't think Uncle Gene would believe in it.

We all headed outside and visited a few more minutes until little Olivia announced she needed to go pee-pee. So, after hugs and promises to get together soon, off we headed - us back to Surprise and our new Arizona family out to Gilbert (they just recently moved here from Utah).

On the way home, I was thinking deeply about what I had experienced and my emotions overcame me. I started to cry. Here was a very nice man, whom I had come to love dearly in a very short amount of time, who was prepared to die. As well, here were two of his nephews that could have given him a Priesthood Blessing - if not for healing, at least for comfort in his last days. But, because he was not a member of our church, it seemed that nobody really thought to ask him if he'd like one. C then realized that I was sad and touched my arm a little, ever so compassionately, asking me what was wrong. I told him what I experienced, how I was feeling, what I was thinking, and how sad it made me that Uncle Gene would die without a blessing and that peace and comfort that comes from a Priesthood Blessing and that he and Lary could have offered to give him one. C told me that he had thought the same thing and had thought about offering one. He then told me that he would talk to Lary about it and see if maybe Uncle Gene would be open to it. I mean, it couldn't hurt, right?

We talked some more and then I told him what Uncle Gene and I had privately talked about. He told me that he had told his dad when he was talking on the phone with him out in the hallway, that he really needed to get out here and see his brother soon or he would likely never see him alive again. I, too, think they need to have that final bonding time before Uncle Gene passes over to the other side. I hope he does come.

What a special afternoon of doing something truly sanctified on the Sabbath (that's what our lesson in Gospel Doctrine was about today). I'm so glad we went, even if it is, unfortunately, the last time we get to see him alive.

Thanks for sharing your thoughts and feelings. Nice post.