First, I want to say that I truly appreciate everyone's calls and prayers regarding my last entry. It means a lot to me that there are people out there who care about me and the trial I've been going through.

The stomach pit is still there, but not nearly what it was...and it will eventually go away, I hope.

So, this is the scoop. 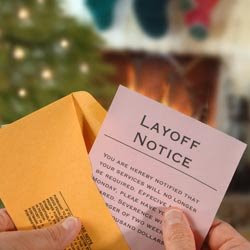 About 5 weeks ago, the president of our company announced that for the first time ever, we would be doing a mass layoff. FIVE HUNDRED people. Everyone in the company was told about it. They all knew it was coming, they just didn't know if it would be them. It would be mostly people in our headquarters facility in Chicago, but there would be people in each of the other locations as well. I was pretty much certain I would be okay because of my position. But, then Satan got ahold of my brain. He started filling it with doubts about my capabilities, the need for me and my position, etc., etc., etc. I started to think that it was a real possibility that I could be one of those impacted.

Last Thursday - just over a week ago, the layoffs started. Thursday, Friday - HR, Finance, etc. On Monday, the big portions began. Some in BT and a few other areas. I was so sad and downtrodden. I just couldn't function. I couldn't think. I cried. I didn't want to lose my job. This economy is horrible and to have to find a new job making the amount of money I make and having the benefits I have, while being fat like I am, was going to be very difficult. I just was so scared. I had worked so hard over the last 12 years to rebuild my credit after "he" ruined us financially and I felt that now it was likely to be ruined again because of this. I was just struggling so bad to get through the thought of losing my job. This horrible feeling became that pit that I referred to in my last entry.

On Tuesday and Wednesday - the big, huge chunk in BT hit - 200 people. The pit worsened. C gave me a blessing after a long discussion on Tuesday night and I went to bed feeling that Heavenly Father would comfort me. I got up and went to work on Wednesday and the remainder of the 200 BT folks got their notices. But, then, Thursday morning, there was one person that got their notice in my area - MY BOSS. I was terribly DEVASTATED. I didn't cry in front of him, but later that day while talking to a peer of mine on the phone, I broke down and started bawling. I truly love working for and with my boss. We have such a great relationship. I didn't want him to leave. He had begun anticipating it happening, so when it did, he wasn't too surprised. He and I had talked about it before hand, as well, and I could tell that although he didn't want it to happen, he was okay with it happening.

Thursday came and went and a bunch of my friends from the other side of the business were also severed. Not just a bunch - a lot. A lot of long-time friends. It was so emotional. I knew our area's day was today (Friday). I was not excited at all for the day to come - other than for it to be over and done with.

Well, the good news is that I still have a job (thank you Heavenly Father for answering that prayer!). The bad news is that 4 people from our area in Arizona were severed, 6 from our Ohio center, and a LOT from our Chicago center...some were people we suspected, others were total surprises. Some were people that I have come to love and respect very deeply. It's especially sad because the people didn't even really get a chance to say goodbye. It was such an emotional day. A lot of tears. I am worn out and exhausted mentally and emotionally. I just want to sleep for 2 days.

There are other factors involved in this whole thing, too, about who my new boss will be, etc. I'm not too keen on the selection, but there is nothing I can do about it. I am going to have my pity party tonight and then, tomorrow, I will be better. I will move on, put my chin up, and move past my feelings for the person because it's not worth my time and energy to harbor hard feelings. Life is too short to be upset with people. Who knows...maybe he's actually a better boss than he is a peer.

So, there it is...the story about the current pit (not currant) in my stomach. My life is still in the Lord's hands...where I plan to leave it forever.

Oh, Kristin! That is a really hard thing. The economy is SO TRULY scary right now. And NO ONE is immune. Just when you think you are safe, you aren't.

Duff hasn't worked for 8 months, and no, we don't have an endless supply of money like some people think. We have cut back in every area. But same thing: who's going to hire a 55 year old who used to make a high 6 figure income????

I am so thankful for you that you kept your job! What a blessing! Hang in there with the new boss. It will all work out.

So sorry to hear that. That is definitely a emotional rollercoaster and stressful! I am glad that you were able to keep your job. I pray that things go well with the new boss and that you will be blessed!

Wow, that is always a scary thing to go through. We love you and hope things keep going well. Just keep postive and things will some how work out. Our prayer will be with you. Love you