We arrived at the church at 8 a.m. this morning and much to my irritation there were no pews left. Okay, wait...the conference starts at 10 a.m. and it is only 8 a.m. and all the pews are taken (with nobody sitting in them?) Apparently, people had left their books, etc. there from last night and those in the choir had also put their books down when they got there for the practice. Luckily, Brother Schroeder offered up space for the two of us on the pew he was in. I sat there and read my new book while Melon Man went around and visited with folks he knew as they arrived. I enjoyed listening to the choir practice and wished, in a way, that I had chosen to be in the choir for this special day.

Our stake is so large, that they had to broadcast the meeting to a number of the buildings in the stake. They had asked that all those who attend church regularly in one of the other buildings, attend today at that particular building, except the Sun Valley ward - they were asked to attend in the Wickenburg building. Our building - the Stake center - was packed. People had to park in the dirt field just south of the church.

Time finally came for the meeting to start. The opening song was Lilies of the Valley. Oh, how glorious! It was wonderful. The music just filled the room with the Spirit. It was so nice seeing all the men and young men, who were part of the choir, in their suits and suit coats. Even though it was 200 million degrees outside, they were honorable enough to wear their suit coats.

President Hancock conducted and he started off with the business of Priesthood sustainings. First, the new Elders. I was surprised to not hear Derek's name read as I didn't recall that he had been sustained in the last conference, but maybe he was. Then, it was time for the new High Priests. This was it! President Hancock begain. The very first name he read was Melon Man's! I was so excited and proud as Melon Man stood when his name was called. Then, President Hancock extended the vote to the congregation. What? He was the only one? Wow. All eyes were focused on him and all hands were raised. No objections. I was beaming. It seemed like this had been a long time coming. Next week he will be set apart. (We'll be having a family dinner afterward, so if any family members and friends would like to come and be a part of this special day, please do! Please just call and let me know you're coming so I can be sure we have plenty of food for everyone!)

Soon, the time came for Elder Jensen to split the stake. He gave a quick rundown of some statistical information about the growth of the church. He shared that this stake has grown tremendously in the less than five years it has been in existence. He shared that 70% of new members in the church speak spanish. He then proceeded to divide the stake into two. The Surprise, AZ stake now became the Surprise AZ and Surprise AZ North stakes. Our ward was assigned to be in the new stake, along with the Sierra Montana, Sun Valley, Wickenburg, Willow Canyon, and Sun City West wards, and the Wenden branch. As of this time, we have no ward buildings or Stake center so we will be sharing with the other stake until they can be built. Apparently, the new Stake center is to be built out by where the house that we built a few years ago is located. Also, we will begin attending church in the Verde Vista building rather than in the current Stake center. Our meeting time will be changing too to a much later time in the day, but oh well. It's hopefully only until the end of the year.

Next came the time everyone was eagerly anticipating...the announcement of the new Stake presidencies. Our stake president, Alvin Hancock, was made the Stake President of the new stake with Thane Thalman as First Counselor and Micah Rolfe as the Second Counselor. Interesting! See, last night, Melon Man and I went to Olive Garden for dinner. I related in my last post how we saw Bishop Rolfe and his wife there. Well, I didn't mention something that happened during dinner because it didn't make any sense then like it does now. 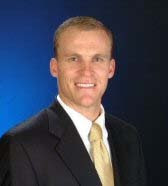 Micah and Marie had just sat down and ordered. His cell phone rang and he answered it. Hers rang, she answered it. His rang again, he answered it. All of a sudden, they both jumped up and sort of ran off, with Micah telling one of the waitresses that they had to go to the bathroom and they would be back in a minute. Melon Man and I didn't think anything more of it. But, today, when they announced his name as the new 2nd Counselor, things kind of fell more into perspective. We don't know that they did or didn't get a call to meet with President Hancock this morning or later that night, but maybe they did. I kind of imagine that that is what the call was about and they stepped away from us so he could tell her about the phone call in private. Anyway, his testimony today was very heartfelt and you could tell that he is the one the Lord needs in his position right now.

Elder Jensen made a very profound statement today regarding the new leaders. He said, referring to the fact that neither of the prior counselors had become the new Stake President, "Sometimes, those who are chosen are not the popular choice, but rather they are the Lord's choice." How true. It reminded me of a situation I struggled with when a certain someone was made a bishop and how I didn't like that that was who it was. That was who the Lord wanted in that position at that time. I didn't see what at the time, but looking back now, there was a reason - for that person - and for me.

One last thing I wanted to remember from today was President Nally's testimony. It was so strong. I watched as this man struggled to get the words out in a way that would convey to us his true love for the Savior. You could just feel the Spirit radiating from him. My heart was so touched and I ached to have the same closeness with the Savior that this servant of His has for the last few years.

Today was a day that I realized a dividing line between a ward calling and a stake calling and just how much more in tune with the Spirit you must be, how much more spiritual and close to the Savior you must be, and how devoted to the gospel and the Lord you must be as well as become. These leaders have something so special about them. I hope that someday, I will be able to be in their presence more frequently to feel of their special spirit and love for others and the Lord.

After church was over, we came home and had some lunch. We sat down for a few minutes and then we were out. Actually, I don't even know if Melon Man was out or not. I just know I was. I did another one of my "take a long Sunday nap" things (which I don't really like to do) and I slept from about 1:30 until 5:30. (So, of course, now it's 2:00 in the morning and I am not tired. I have to get up at 4 a.m. so I really should be in bed, but I just can't sleep.)

I made a meatloaf, mashed potatoes, and corn for dinner. While it was baking, I cleaned out the bottom and top shelves of my spice cabinet. 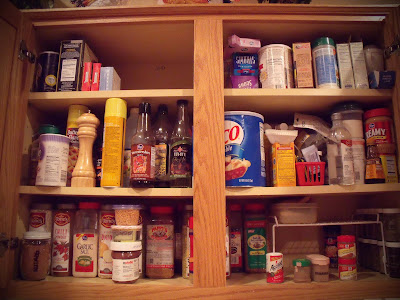 I got rid of some old seasonings and migrated some of the duplicates to the food storage cupboard. How many things of onion powder does one need? We had three! 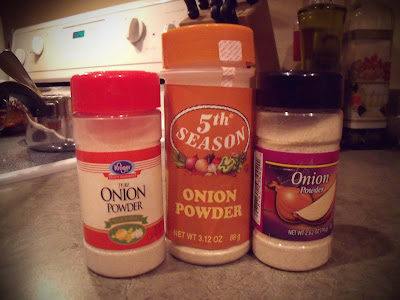 Now...the funny thing about this is that I did not buy one of those because I do not like onion powder! Melon man has bought them all. That's okay though...we'll just have a bunch of it for our food storage. 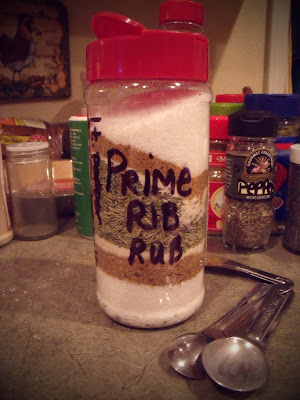 I also put together a giant container of my secret prime rib rub. Yum. It makes prime rib so good. Not too much or too little of this and that. Just the right proportions. (Yes, Jennifer, it's the combination I used on that Christmas prime rib that I made!)

I took all of the little containers of spices out of the bottom shelf and rearranged, threw away, combined, etc. 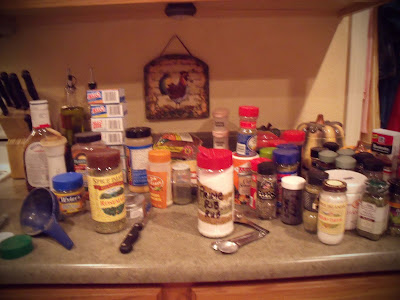 Melon Man doesn't think the cupboard is any cleaner than it was before, but it really is. At least the bottles of spices, etc. aren't falling out when you open the doors now. I still have to work on the middle shelf, but I thought the bottom one, especially, looks far better than it did before!

That is hilarious! I did exactly the same thing on Saturday! Great minds think a like, or we can only stand it so long?

I want your secret recipe. Tell Clint congrats, I am really glad for him.

I want your secret recipe as well! I am the only one that eats meat (ok Dono too occasionally)and I would like to use something other than garlic salt on them. :)
Thanks for sharing about Stake Conference. That stinks that there is no stake building for us yet but all in the Lord's timing which I must remember. Since we will have to go to VV building anyways I think Ehren and I are going to give WC one more try as he has said that he feels we need to. So just need to find out what time they go.

You and Cindy! However mine is better. I do the combine thing as well. I don't alpha it.