Holly was supposed to come today, but she had something come up and we rescheduled for next week. That was fine with me, except my house really needed to be cleaned and I just wasn't feeling up to it after yesterday and this crappy, hacky cough I have.  So, I worked on figuring out how to do this lame-o meds-by-mail stuff that we're required to do now for our prescriptions.  Hours and a couple phone calls later, I finally had an idea of what we needed to do.

I had been telling Dog all week that we would go to the dog park today.  He has been so good all week.  It's like he can understand what I say.  I told him that once Daddy got home from work, we would go to the park.  As soon as Melon Man opened the garage door, Dog was right there raring to go.  I told him he had to wait until Mommy took a shower.  He patiently sat on the rug next to the shower while I cleaned up.  As soon as I was dressed, he was ready to go again.  He was like a maniac jumping and running around the house.  He was SO EXCITED!

I took him out to the truck and he jumped right in and sat on his seat in the back.  Look at him.  Just like a little kid excited to go to somewhere fun! 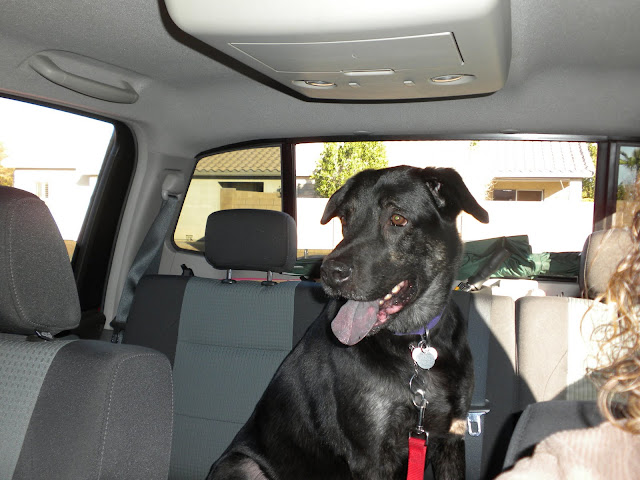 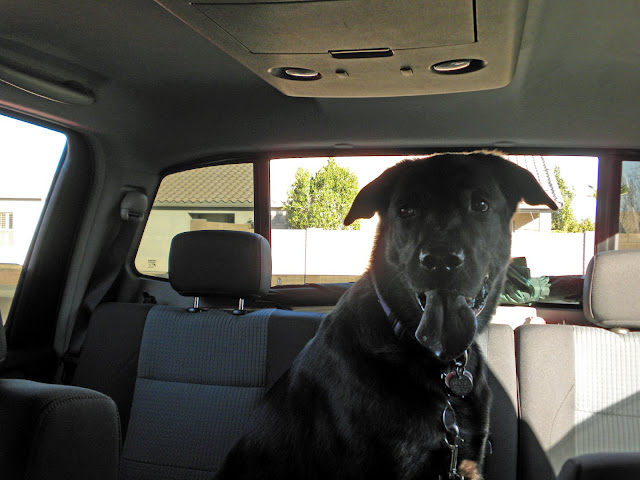 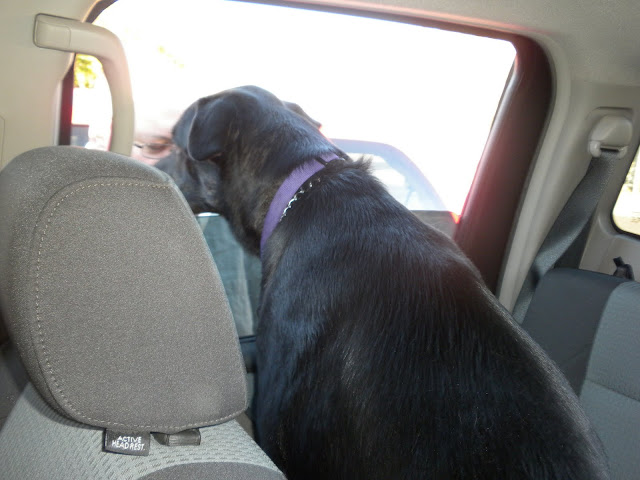 He doesnt like to hang his head out the window too much so I was surprised to see this.  I guess he knew where we were going though!  It was funny...as we turned onto the major street before the park street, all of a sudden he starts whining.  He was sniffing at the air.  He KNEW where we were going.  Soon we turned onto the park street and the dog was having a kanipshun fit (how on earth do you spell that?!?).  We parked and if he had been able to open the door himself, he would have been 'outta there!'.  We walked to the big doggie park and once he was inside the gate and free of his leash, he WAS outta there.  He was running all over the park, smelling every single dog, peeing on every single tree and garbage can, having a MAH-VEL-OUS time. 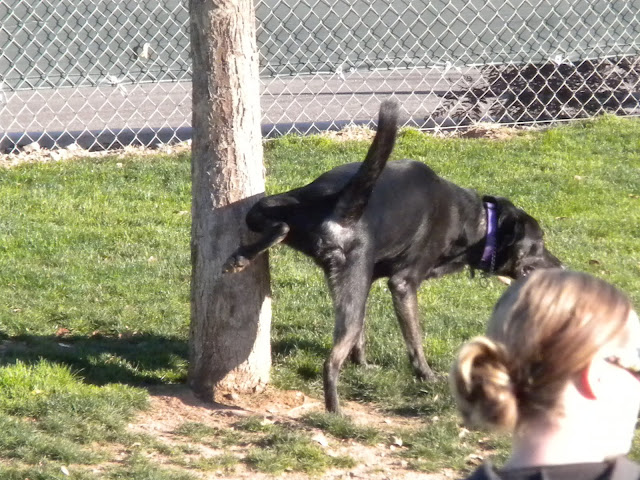 Melon Man was petting every little and big dog there was.  This was Daphne.  She reminded him of his Homer.  Daphne loved the rubs Uncle Melon Man was giving her. 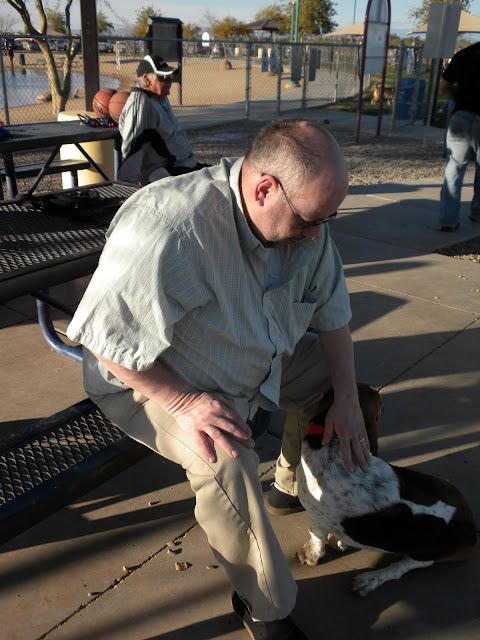 It was soon time to go.  We'd been there about an hour maybe and we were hungry.  Plus, Dog had been so good this week that we'd promised him Sonic for dinner.  So, off we went.  Dog loves Sonic.  We get him the cheap-o kiddie burger and he gobbles it down.  We also got him two cups of ice water and put them in the cup holders in the back and they were soon gone too.  We finished up our dinner and then headed off to Harbor Freight for a couple things.

Why is it that when we go to Harbor Freight - a store I really find no enjoyment in going to - that I come out with more stuff than Melon Man?  I have no idea.  And I always buy weird stuff there.  Tonight I bought my own mallet.  Yes, a mallet.  Why?  So I could more easily put the gammet lid frames on the food storage buckets.  That's why.  I also bought some little metal letter punch doo-hickeys so I could "stamp" letters into metal for jewelry.  Yeah.  Really.  Now I just have to find the metal to "stamp".

Dog was so tired from playing that he just laid on the back seat of the truck while we drove home.  It was like a big kid in the back seat.  Once we got home, he walked in, found his "spot" on the living room rug and that was it....umph.  Like a bump on a log.  He was done for the day.  Good times....

Mmmmm ~ Harbor Freight! Did you get your free FLASHLIGHT?

You are too funny!