Last night was HORRIBLE.  I was in so much pain all night.  Around 3 a.m. I "tried" to get up to go to the bathroom and I could barely move.  Every inch I walked hurt like I had needles all over in my body.  Trying to sit down on the toilet was incredibly painful and trying to get back up was even worse.  I cried as I hobbled back to bed and then I cried as I tried to go back to sleep.  Eventually, I fell back to sleep and I tried to avoid having to turn over in the middle of the night because it hurt so bad.

In the morning, I still could not move.  I had to lay there and watch the kids get ready.  Melon Man took them to get some breakfast and then I sent them all off to the park for the day.  They started off at California Adventure this time and Uncle Melon Man grabbed this cute picture for me. 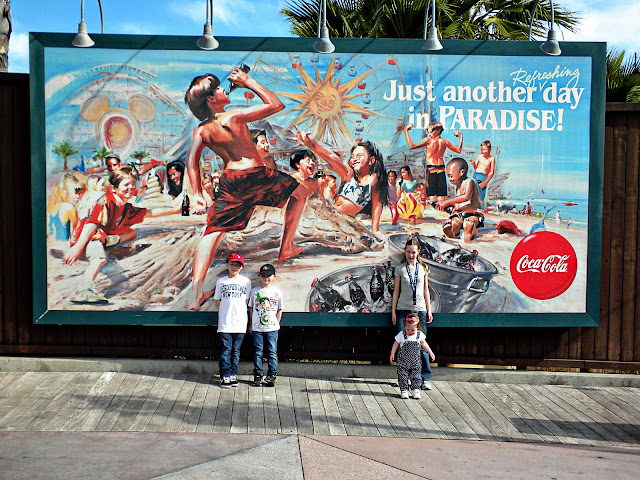 I slept off and on throughout the morning and around 1 p.m. Melon Man called me to see when I was coming over.  I didn't know.  I could still barely move.  Finally, around 2 p.m., I got up and painfully took a shower.  I took the shuttle over to the park and slowly made my way in to Main Street.  Melon Man met me there with a wheelchair.  I really didn't want to have to use a wheelchair, but I was so glad that I did.  It made the afternoon and evening so much more enjoyable for everyone, I think...except Melon Man, who had to push me around.

At one point during the day, Jennifer called and told us the results of Taylor's cancer staging.  He is at stage 2B.  The news was not good.  I guess it is better than being at a stage 3 or 4, but we really were hoping that it was only in stage 1.  It really saddened me for quite a while.  I just felt like crying.  Here we were...at the happiest place on earth...and my 16 year old nephew is at home feeling like crap with cancer, learning that he's going to have to go through chemo and lose his hair and throw up all the time.  What is wrong with this picture?!?!?

After a sobering bit of time, we mosied on and worked our way through Fantasyland.  I love the simplicity of the rides in Fantasyland.  They take me back to my childhood.  I remember watching so many of the movies on Sunday night.  My favorite ride in Fantasyland is Peter Pan's Flight.  I LOVE, LOVE, LOVE the part where you fly through the stars over London.  I could ride that ride over and over.  I loved this clock tower outside of the ride... 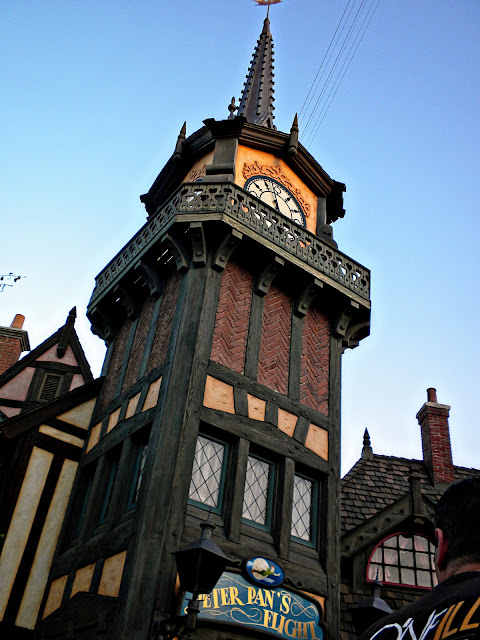 While we were waiting to go into Peter Pan's Flight, we turned around and could see the evil queen from Snow White and the 7 Dwarfs peeking out of the window periodically.  She just is evil looking! 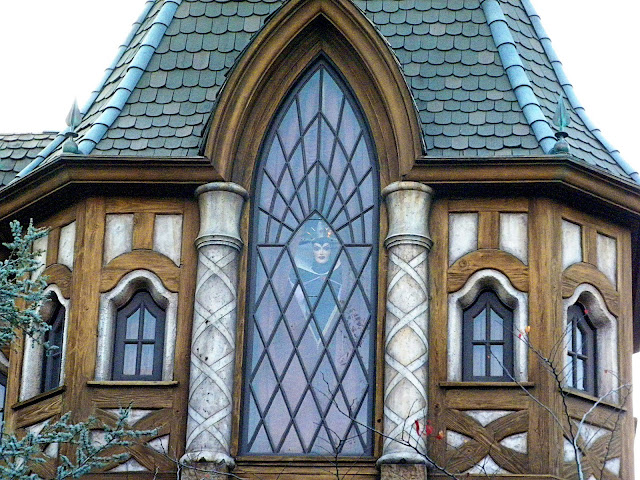 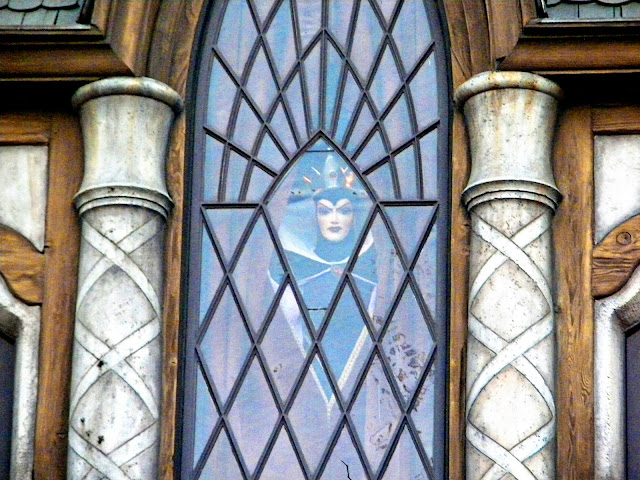 The kids had never seen the Sword in the Stone before.  They had to check it out.  And, of course, Dilly tried pulling it out of the stone...but alas, it wouldn't come out. 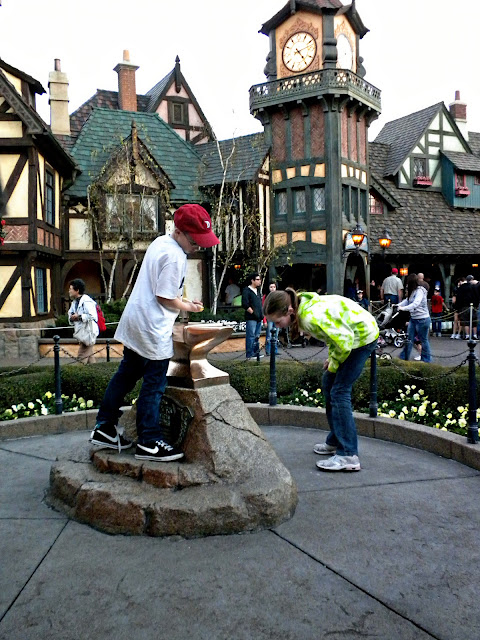 The sun was just starting to set and the lights on Sleeping Beauty's castle were coming on.  The lighting was perfect so I grabbed a few more pictures before we headed out of Fantasyland. 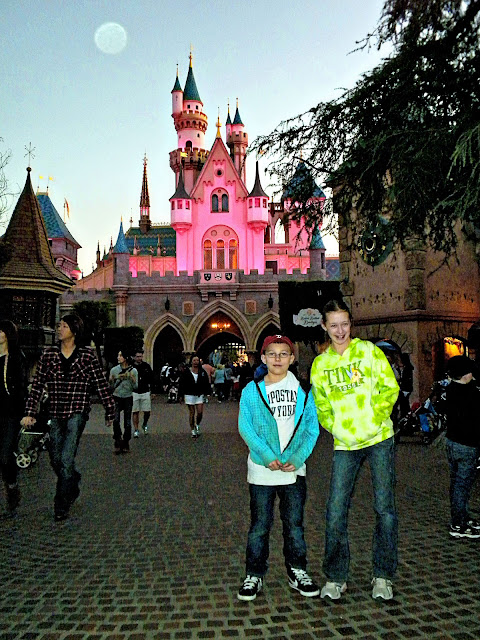 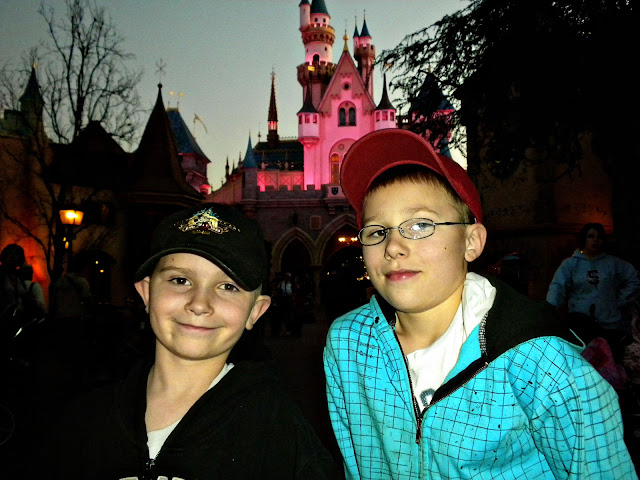 We bought each one of the kids these mouse ears as a souvenir from Auntie Fatty Girl and Uncle Melon Man.  They were darling.  They lit up and were really colorful.  The only problem was that they are kind of tight and so they hurt the kids' heads a lot and didn't end up staying on their heads for too long through the rest of the night. Dolly wanted her own churro...so her dad bought her one just outside of the Buzz Lightyear ride.  Of course, Melon Man and I also had to have another one.  Couldn't pass up a hot churro on a cool January night!  Not the best picture of Dolly, but I think she was just cold!  Super cute jacket though!! 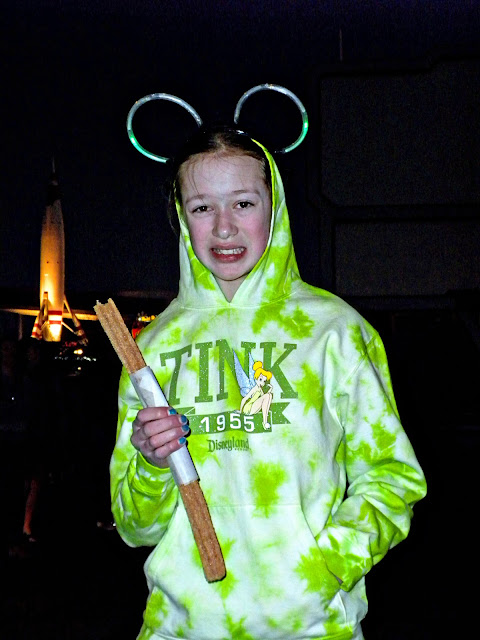 We made our way over to the Autopia and after a bit got into the cars.  I rode with Dilly and he was Mr. Cool Driver.  Check him out...all laid back... 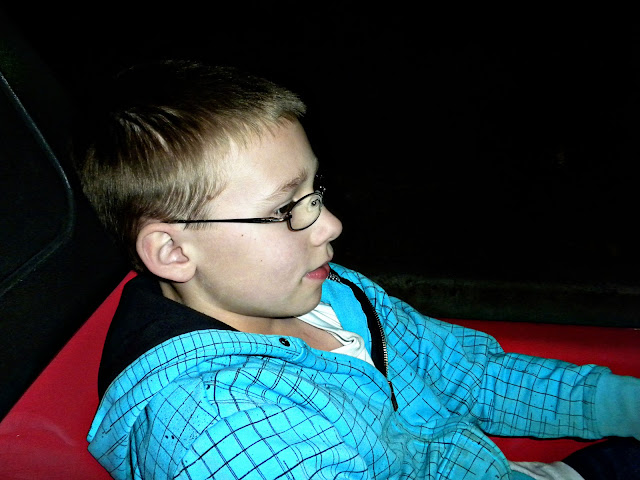 ...and then finally smiling for Auntie.... 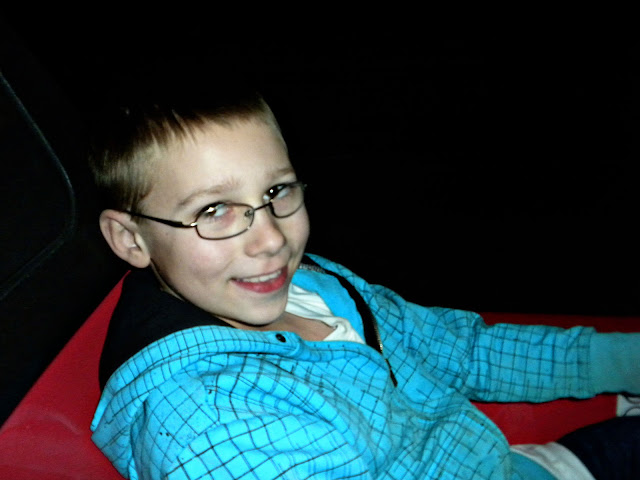 Kurt, Dolly, and Dilly all wanted to ride Space Mountain again so they did that and Ang, Melon Man, Scooter, Holly, and I headed over to the tea cups.  Scooter wanted so badly to ride the tea cups but I was too fat, his mom gets sick, and Melon Man just doesn't like riding them.  But, in the end, Uncle Melon Man gave in and rode them with Scooter.  Do you know how hard it is to capture a picture of a tea cup that is spinning and spinning around...in the dark?  Yeah, it's pretty hard.  But, if you look really close, you can see them... 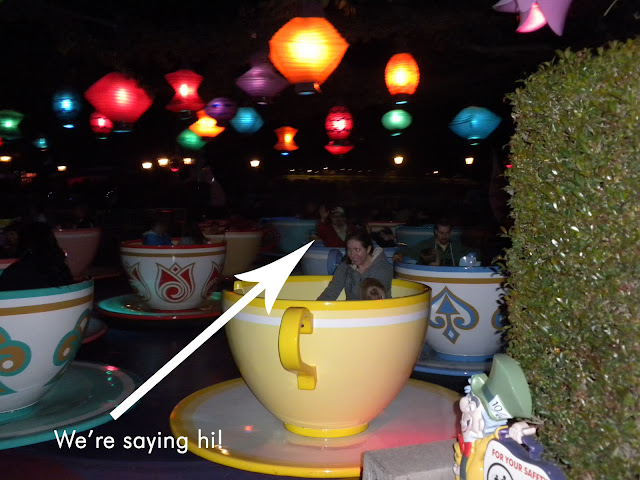 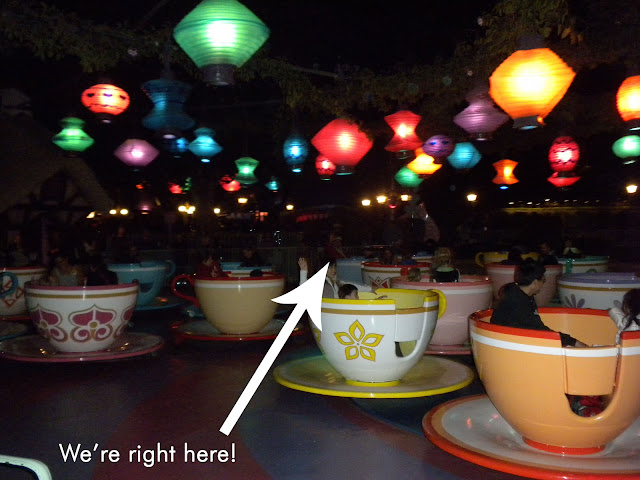 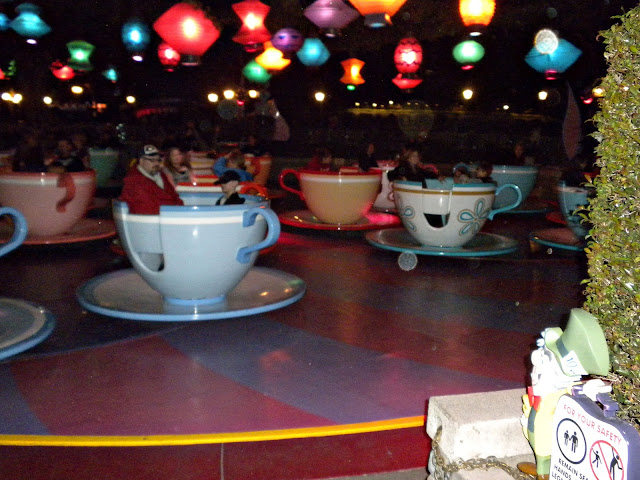 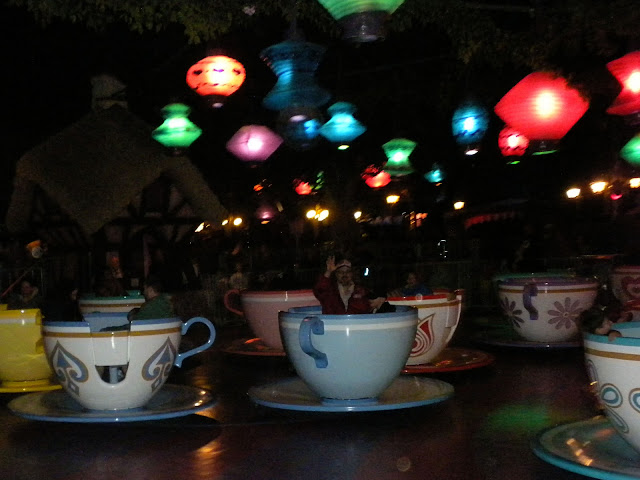 Not too long after this, we raced to ride Pirates of the Caribbean one last time.  Kurt was running and pushing me in the wheelchair, the rest of the family was running along, and Melon Man was walking about as fast as he could without running.  We made it inside Pirates just in time to be the last boat.  But...Melon Man hadn't made it yet, so I stayed back and waited for him.  We ended up not being able to ride, but it was okay.
It was amazing how quickly the park emptied out.  It was really quite weird though seeing Disneyland empty and us being the last ones practically.  I mean, it was REALLY WEIRD!  When you go to Disneyland and the lines are long, you just wish and wish and wish (upon a star) that you could have the entire park to yourselves, but when you actually do....well, the magic kind of disappears.  Now, granted, I detest long lines at Disneyland, and that's why we go when we do, but no lines, no people, um yeah, don't like it.
We walked back to the shuttle stop and missed the shuttle by 10 minutes.  We could have waited for another 20 minutes and another one would have been by, but we were done for the day and ready for some dinner so we all just walked across and down the street (painfully for me) to Denny's.  Yeah, not really the place we all wanted to eat, but it was close.  After that, we walked back to the hotel and got ready for bed.
Kurt's family leaves in the morning for San Diego and Melon Man and I have one more day at Disneyland.  Hopefully, I'll be feeling better tomorrow and can walk finally.