I have so loved being off the last couple of days! I cannot believe it is already Friday. That means that I only have Saturday and Sunday left before I go back to work. :( Bummer.

C and I are going out to Bartlett Lake for a picnic today. Of course, we're taking Dog with us. Dog loves to go for rides in the truck. He just doesn't like it if we go for really long rides. He gets really quiet and refuses to lay down so he sits there the whole time and looks as if he's sea-sick. He gets a hamburger though if he's really good and that seems to cheer him up. We just found out that his cousin Darla ate some goodies that weren't too good for her and she was really sick. Not good. She's better now though. Yeah!

Had some awesome Chinese food last night for dinner. The best part though is that they deliver! Yahooooooooo! I love delivery! Makes my life so much easier! We actually went in and picked it up though because it was our first time eating there and so we wanted to see the place as well as we didn't have a menu to know what they had. C and I like very different items when it comes to Chinese food. I love spicy and he doesn't, so it ends up costing us more because we like what we like. So.....last night's dinner cost $42! Not like $42 is a lot compared to some places we go periodically, but hello, this was take-out Chinese food! I do have to say though that EVERYTHING we got was awesome:

Needless to say, we still have tons of food left but it's so good, who cares?!?!

So yesterday I mentioned that I was thinking of restaining the buffet that I had refinished a couple of years ago. Cindy posted in her comments not to. The funny thing is that the ORIGINAL color was a walnut. I, of course, hate walnut color. I don't think there's any umph to it. The color I'm staining the garage sale armoire though is a red mahogany and it's pretty close to the color of our new floors. I think I'll do the armoire first and then see how I like it. Cindy - I can't promise anything, but I'll take your advice under consideration!

Okay, so Cindy also wanted to know when/where we got new floors. It's been about a month or so now since they've been finished. We had the carpet ripped out of our bedroom, living room, and hallway and had Malaysian Kempas Pergo installed. It took a long time, but Craig did a beautiful job. They are gorgeous, just hard to keep free of dust and drool. That, I guess is one of the downfalls of the darker floor. But, I love the darker wood...it looks so rich and elegant and really adds to the look of our home. Check out the picture of our living room after the carpet was ripped out! This is how we lived for over two weeks - with a portable table and an office chair. It wasn't very fun trying to watch tv that way! 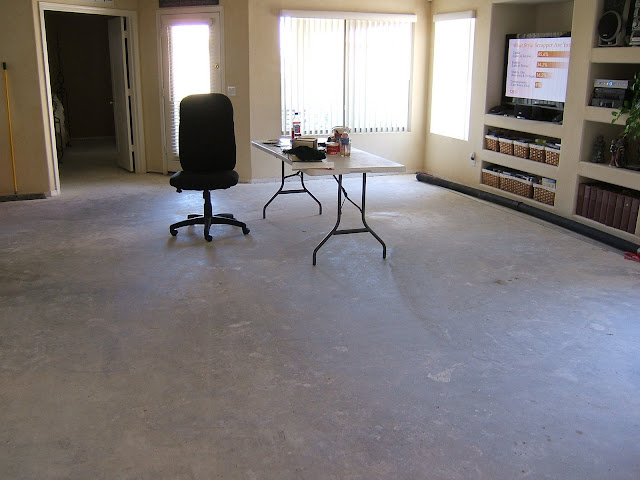 But then, the floors started going in and look how beautiful they are! I haven't taken any other pictures lately with the furniture back in the living room, so this will have to suffice for now. 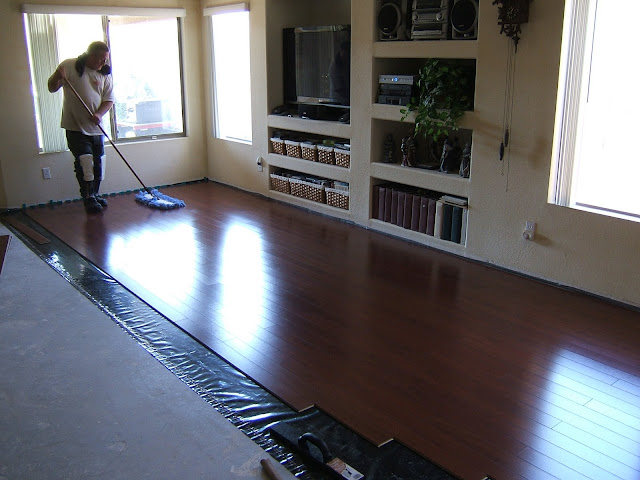 I've also recently purchased fabric to make drapes for the living room (finally after 6 years of just having blinds). The long drape part will be striped and the valances will be this swirly fabric. 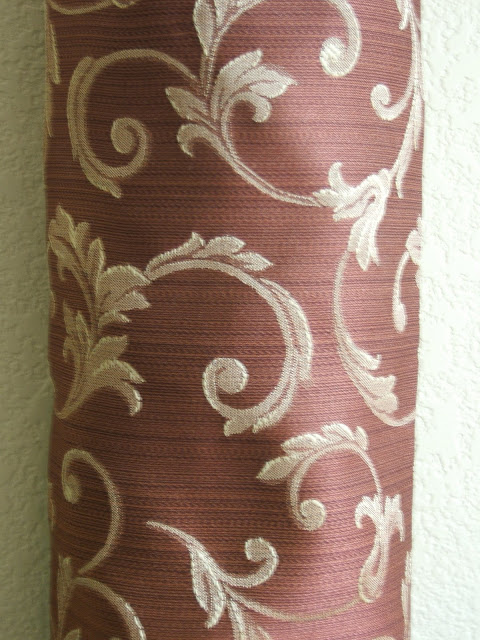 I'm still deciding how I want the valance to look, but I do know that I want the drapes to go all the way to the ceiling on the lower walls so it makes the window and room look bigger. I'm also going to install the drapes further out on the wall so it makes the window appear larger too.
So, back in the middle of September, Lisa and I went on our used-to-be annual pilgrimage to the Scrapbook Convention. It had been three years since we last went and so we were totally stoked to go again. This time it was in downtown Phoenix versus Mesa. I'll just say - we won't be going to that one again. We decided we really like the one in Mesa, so instead of going in the fall we'll just have to go in the spring instead. It was just so hot and the recommended hotel was 4 blocks away ( I know - it's only 4 blocks) but in 109 degree heat, hauling all your scrapcrap, plus all the scrapcrap you just bought, that's a LONG way! We did get to talk with Creating Keepsakes founding editor, Lisa Bearnson, though! 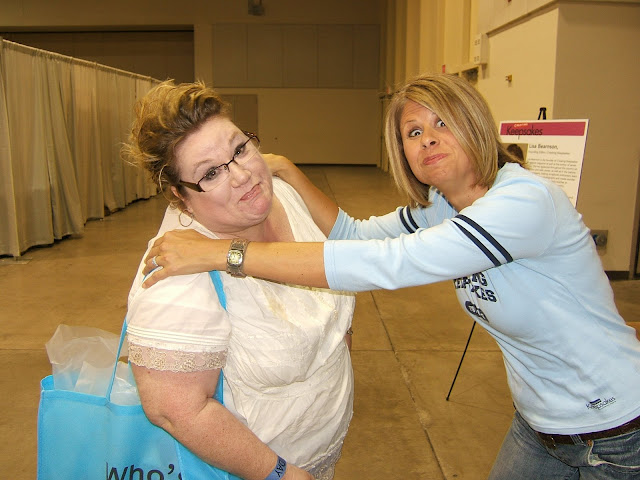 Lisa T had spoken with Lisa B on QVC (wow, that rhymes) about a month or so before the convention and Lisa B remembered her. We didn't get to see Becky Higgins however. Maybe another time!
In closing for today, I'll share what I thought of Acts 21-28 which we were asked to read in preparation for Sunday's Gospel Doctrine lesson. I've never really studied the Bible very much because it was just so hard to read, so I didn't know much about Paul. But apparently, he wasn't the best person when he was known as Saul. Then, just when he changes his life and devotes it to Christ, all kinds of bad things happen to him. Isn't that how life works nowadays too? I see people who are on the edge of the darkside and then they turn their life around and God continues to test them - sometimes even more than before? I think He does it to make sure we are committed but yet He knows where the limit is for us and doesn't give us more than we can handle. I thought it was so awesome how Paul, even though he was continuously being challenged, was still true to the Lord and didn't deny his having seen Him. It was the same with Joseph Smith. He never denied the experiences that he had - no matter the pain, the sorrow, or the torture he endured. Awesome.

The floor looks very nice. I didn't know you had it done and that Craig did it! I LOVE walnut stain, but am partial to mahogany as well. Just try and keep each piece's 'integrity' and it will turn out great.