The Food Storage is Put Away. FINALLY.

Melon Man and I spent about 2 hours yesterday cleaning out the cabinet where we keep a lot of our food storage.  It had been dwindling down all year as we'd used a lot of things and there were a lot of things that needed to be purged.  Plus, I was tired of seeing the stacks and stacks of cases of food piled in front of and off to the side of the cabinet since February!

Melon Man was a great help with it all.  He didn't think we could get everything in, and we didn't, but we got most of it!

The thing that is great about the cabinet where we store it all is that it is DEEP.  Not too deep that you could lose a small child in it, but deep enough to break down a double stack case of corn and lay both flats one in front of the other and it leaves just about 1-2 inches in front.  That helped because we were able to then layer corn on top of green beans on top of white beans and know it was exactly the same in the back.

It felt SO GOOD to close the doors when we were done.  They'd been open since about March or April when it started to get warm - that cabinet is on the west side of the house so in the summer we open it to let cool air in - plus, we'd piled all the new cases there so we HAD to keep it open to be able to get into the cabinet if we needed something.  But, what felt even better than closing the doors was opening them back up and seeing this all organized and knowing that we are following our prophet's counsel to be prepared.  Look at how beautiful it is! 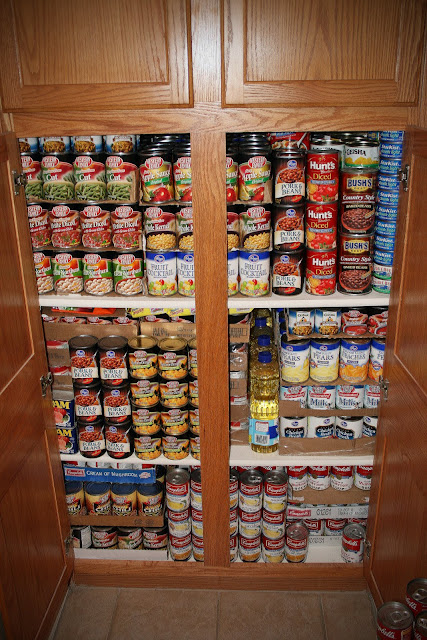 After we finished this, I still had some cans leftover that were little loose cans that need to be used soon.  But, my kitchen cabinets are full too so where was I going to put them?

Well, for a couple years now, I have been just tossing stuff into the cabinet under the sink in our bathroom.  There's been a box in there with who knows what in it.  There is just "stuff" in it.  It's really bugged me for a long time.  And the cabinet is a really good sized cabinet so the space was really just being wasted.  Plus, the drawers in the cabinet were REALLY bugging me.  They have never been cleaned out in the 8.5 years I've lived in this house.  Melon Man's electric razor pops open once in a while and his whisker cuttings drop into the bottom of the drawer and that grosses me out.  My hair was everywhere in the drawers.  There was old fingernail polish, old ratty scrunchies, you know what I mean.  Yuck.  So, I figured I'd spend another hour and get it all cleaned out.  I purged and cleaned all the drawers.  Reorganized them too.  The whisker drawer....absolutely yucky.  There must have been two inches of whiskers in it.  Nah, just joking, but at the very back of the drawer....a pile of whiskers 5 inches across, an inch deep, and about a quarter inch high.  YUCK.  I never knew it was there...inertia from opening and closing that drawer a lot works great, I guess.

After I finished the four drawers, I moved on to the two cabinets.  The one on the right was first.  It was SO BAD.  When I was done, I had a box of "necessities" to be moved to the other bathroom, a basket with my everyday stuff to be relocated to the cabinet on the left, two swim towels to be moved to be with the rest of the swim towels, and a perfectly empty cabinet.  Everything else went in the trash.  It felt so good to see that empty space!  I put the rest of the canned stuff in there and it was done.  I quickly cleaned the left cabinet, stuck my little basket in there, and voila!  Done!

All of this wondrous work did a number on me though.  I haven't moved in those positions for a long time - I sit at a desk all day - I don't get the opportunity to move much throughout the day!  All night long I ached.  I didn't sleep well because I ached so much.  But, I am up for the day now and it's time to work on picking up all the miscellaneous stuff around the house so Holly can clean today.  Then, after she's done, I need to cut vinyl for someone and do the bulletin for tomorrow for church.  Oh, and think of something for dinner.  And, make it.  Maybe I'll even make something for dessert too.  Maybe.  I won't hold myself to it.  But maybe.

GREAT job! It must be in the genes or in the air, because we have been doing the same things. We cleaned out our bathroom cabinets under the sinks. OH, the stuff we keep and for what reason????? Purged and cleaned, did the medicine cabinet and boy it feels good!

That's great....it feels so good getting stuff organized! Good for you... :)

Holy Frijoles! Sorry you are sore, but it looks fabulous! Way to go!