I feel SO good about today!  I accomplished A LOT!  I washed 3 loads of laundry, put away the 3 loads of laundry Melon Man washed yesterday, folded ALL the garments (and there were a lot), cleaned off the island and kitchen counters, did the dishes, put clean sheets on the bed, put the new pillows I bought yesterday on the bed, wrote 2 thank you cards, gathered up all the remaining Christmas stuff to go out to the garage, put away all the scrap crap that was on the kitchen table, hung up two pieces of artwork, took down my brass candlesticks, helped Holly clean the house, and did the bulletin for church tomorrow.  Wow!  Did I feel good or what?!?!?

As I was putting some things away that were on the island, I came across a simple little bag up in my china cabinet.  It was a gallon size ziploc bag and inside was a neatly folded apron that had belonged to my mom.  Auntie had borrowed it years ago to make a pattern or to see how to put one together.  When she gave it back to me, I stuck it up in the cabinet and off and on for the last few years I've seen it there and it's never phased me. 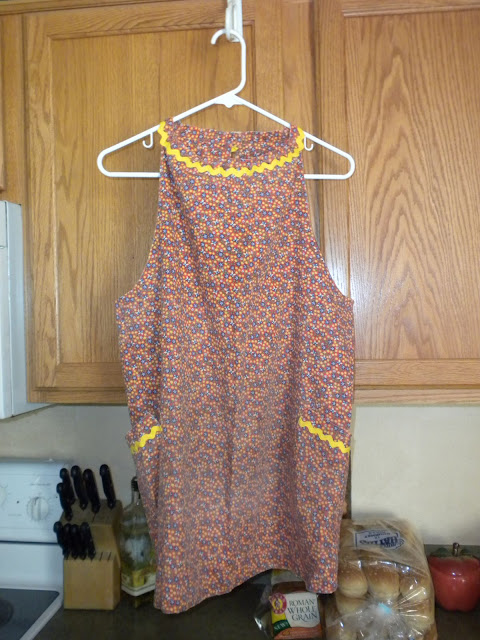 But, today, I decided to take it out of the bag and stick it in the drawer with my other apron.  Big mistake.  I lost it.  I started bawling.  That apron brought back so many memories.  Memories of years and years of her cooking and baking in that apron flooded back.  I sobbed and sobbed missing her.  Then the phone rang and it brought me back to reality.  But, I sure do miss her...the odd thing too was that Dad emailed me a picture of her today... 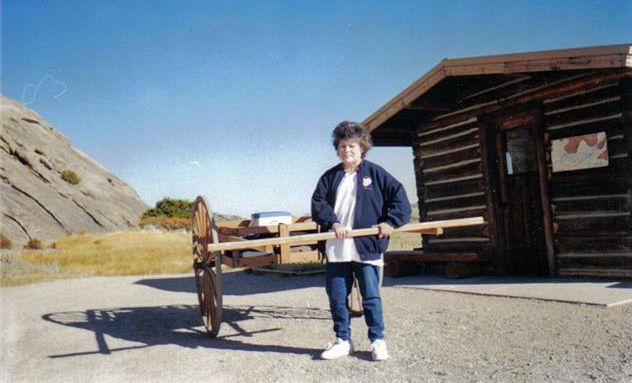 This was from a trip they had taken a few years before she died.  They went to Martin's Cove after she had read the book "Fire of the Covenant" by Gerald Lund.  The book was about the handcart pioneers in the Willie and Martin handcart companies of the mid-1800s.  I have read the book too and it is truly a moving book about an experience that was so important in our church's history and taught us so much about faith, strength, and devotion.  Mom wanted to pull this handcart from the visitor's center to the cove to try to experience what those pioneers did.  As she and Dad pulled the handcart, she started to get tired and tell Dad that she couldn't go on (she had been very ill for a very long time and just didn't have a lot of strength).  My dad turned to her and told she could.  He said that they were lucky that their handcart only had a little cooler in it with their lunch.  He reminded her that the pioneers had all of their worldly belongings, dutch ovens, tents, whatever in it and they were much, much heavier.  He told her she was not walking through 2 feet of snow with frost-bitten feet in a dress with children clinging to her skirts crying because they had no food.  She put her chin up and went on.  The whole way.  They got to the cove and she said she could feel how hallowed the ground was there.  She said that although she and Dad were the only ones there, they could hear voices.  She wondered if they were the voices of those that had died there so long ago.  It was an experience she never forgot.

Melon Man soon got home from work and Holly was still cleaning so we couldn't leave yet.  We had wanted to take Dog to the dog park again, but it was rainy so we couldn't.  While I waited for her to finish, I finally hung the piece of art in our bedroom that I've been wanting to get done for a long time.  I climbed up on the ladder and hung this picture over the vent above our door.  It looks so great there and I can imagine waking up in the morning, seeing it as I open my eyes, and it inspiring me to be happy the rest of the day. 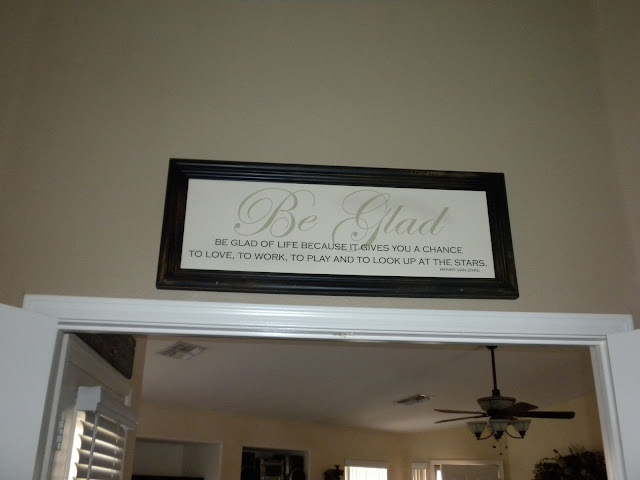 Soon, Holly was done cleaning.  We took her home and then we went to Dave's BBQ for dinner.  Melon Man has been begging to go there so I finally gave in.  I don't normally care for it much - I guess I've gotten so used to Phil's BBQ in San Diego that I just don't like any other BBQ places now.  But tonight, it was pretty good.  The japaleno mac and cheese was great, the spiced green beans really good, and the ribs quite good, but not cooked long enough to make them really, really tender.

After dinner, we went to our new Hobby Lobby.  It's always so much fun to go there.  I was looking for something decorative to put on my big black shelf.  I found SO MUCH that would have been awesome, but I already had artwork type stuff so now I was looking for 3-dimensional type stuff.  So, these are a few things I bought that I really like: 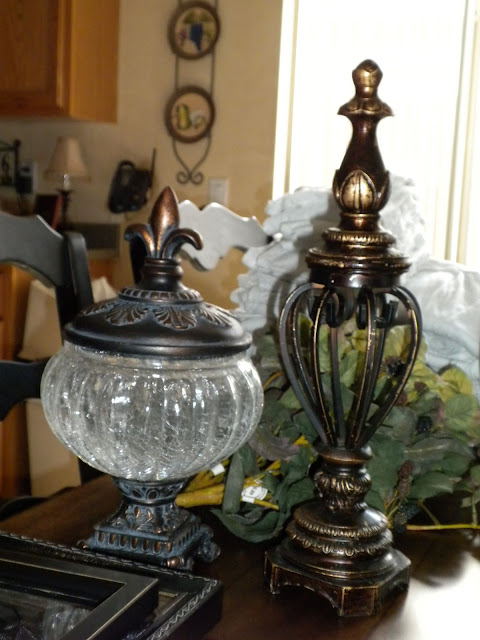 I wanted one more piece, but just couldn't find the right sized item, so I'll have to try to make this stuff work and look for something else later.  After we finished at Hobby Lobby, we headed for Baskin Robbins for an ice cream.  It's always fun to just go sit there and talk while we eat yummy sweet deliciousness.

We soon headed home and I worked on the bulletin for church tomorrow, then made my homemade salsa for the Superbowl party at Lisa's tomorrow.  I LOVE my salsa.  Sooooooo good.  This is how I make it:

The cast of characters: 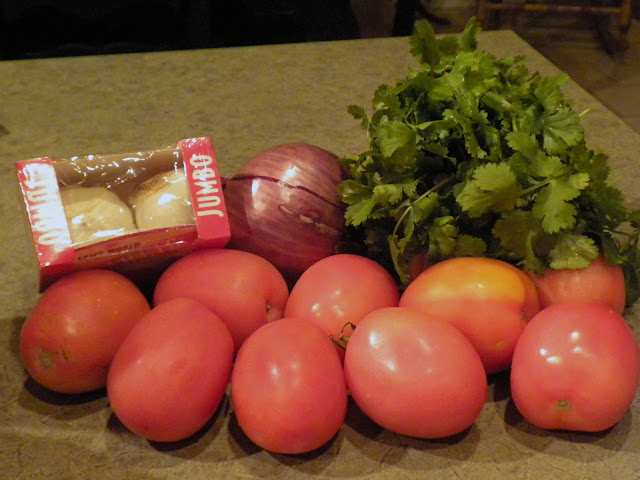 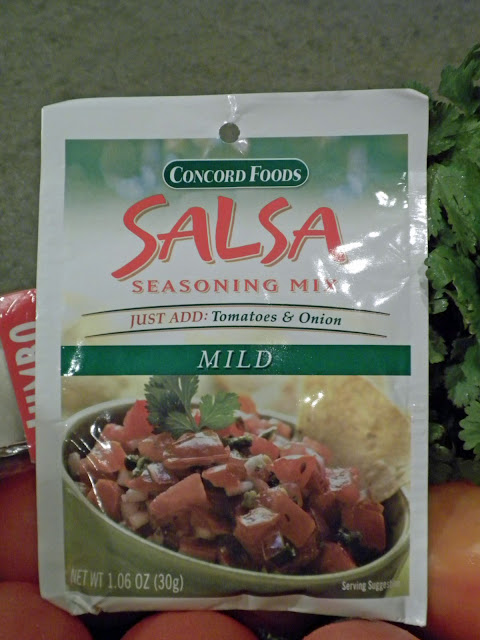 Dice all the tomatoes and dump in a large bowl.  Next, slice the stem end off of the jalapenos and slice the pepper in half lengthwise.  Then strip out the veins and seeds.  Be careful not to touch your fingers near your eyes after this!  You'll regret it! 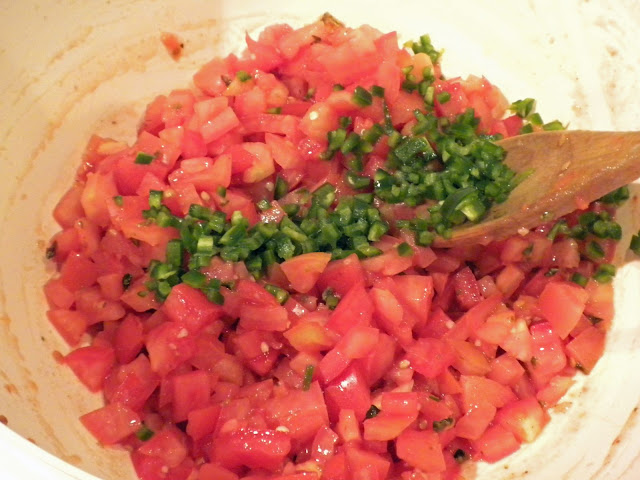 Now, peel and mince the cloves of garlic and dump in the bowl.  Oh yeah.  Garlic, mmmm, good.  Reminds me of this experience. 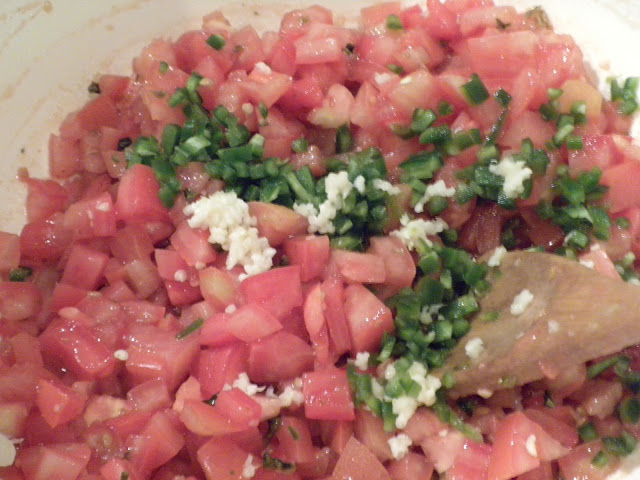 Next, finely dice up 1/2 to 1 whole red onion and dump it in the bowl with the rest of the goodness.  Oh yum.....it's smelling SO good. 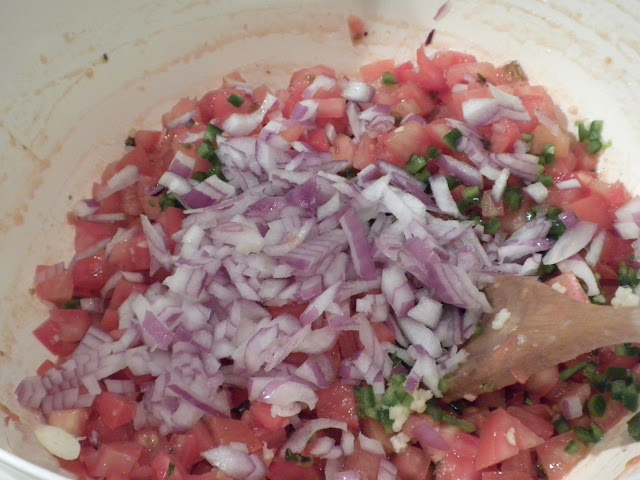 Next, take your bunch of cilantro and just start chopping it to death.  Now, I LOVE cilantro so I use most of the bunch, down to where the stem starts to show instead of the leaves.  Just chop and chop.  Then dump it in on top of everything else. 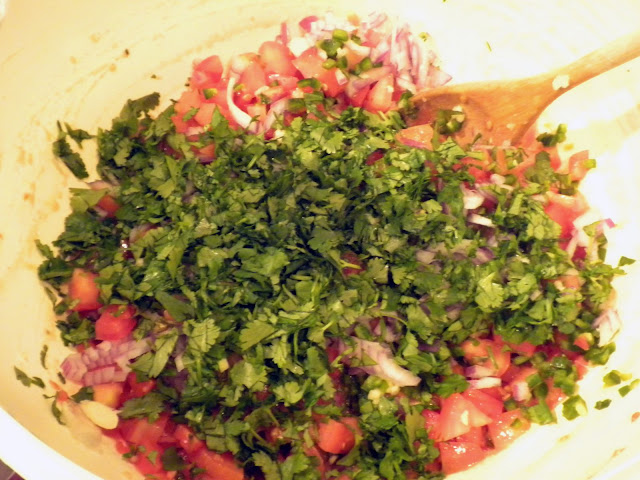 Okay, now dump in the packets of seasoning and mix it all together!  Oh goodness, it's making my mouth water just thinking about it! 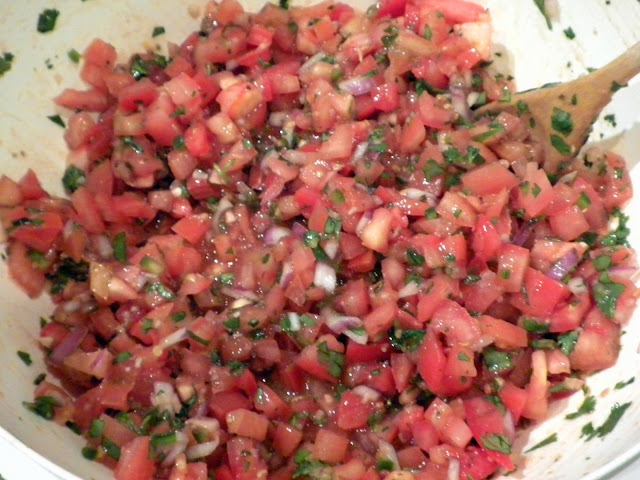 Mix it up really well and then let it chill at least 30 minutes.  Serve with white corn tortilla chips, which are THE best.  Yum-o-la.

After I finished making the salsa, Dog and I watched the last two parts of the Dog Show.  I wish I would have had my camera there on the sofa with me!  It was SO cute.  He was actually watching the dogs on the television!  You could see it.  He was so interested.  Soon, we were both falling asleep (and Melon Man had already gone to bed) so we headed to bed.  It was a long day, but it was nice to go to sleep in a freshly made bed knowing that I'd accomplished a LOT today!

Ditto for me. Love the stuff about Mom. Love your items from Real Deals. And the salsa looks delish!

I love your wall hanging. It would be nice to see that first thing in the morning.