A Long and Sad Day

Well, here I am. Stuck at O’Hare in Chicago. It’s been a doozie of a day and it doesn’t look like it’s going to improve any time soon. The sky outside is black – except when a billion degree flash of lightning erratically streaks across the sky or from the clouds down to the ground. Yes, it’s that time of the year – the time when Chicago is more humid than being in a swimming pool even though it’s only 84 degrees outside….the time when although it was clear earlier in the day, you know that the evening will bring the tornado warnings again and….the delay of flight after flight after flight. And so it is today….

I woke up this morning, after only 3 short hours of sleep, to heavy rain drops hitting my hotel room window. Yay! Although it was raining, hopefully that cooled things off a bit and I could deal with the humidity from the rain rather than just humidity from heat and clouds. I finished packing, got showered, began doing my makeup, and then my phone rang. It was Melon Man…and he didn’t sound good. Oh no, I thought. Please, oh please, do not tell me you’re out of a job. He said he had bad news. Here it comes…. It was not what I expected though.... 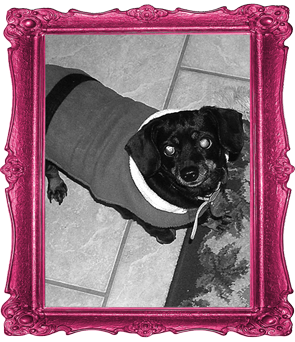 Instead, he told me he thought Miss Pooh was dying. I had suspected that this day was approaching. She had lost some of her rolly polly weight and hadn’t been eating much lately. She had a pretty large lump on her breastbone that felt soft and squishy. She was so old though – 15 to 16 dog years (that’s 105 to 112 in human years!) – so it was about time. Melon Man noticed last night when he went to feed her and Doodles that she was just kind of laying there behind the BBQ in a pile of throw-up. He brought her inside and put her in her little bed in the kennel. He then went to work. Then, when he came home this morning, she just was struggling to breathe. That’s when he called to tell me what was happening. He decided to call around to see how much it would be to put her down. It didn’t matter…while he was doing that, she quietly slipped from this world to doggie heaven. When he went back to her, she was gone. He gathered her up in his arms and took her to bury her in our backyard under the tree in the corner. I want to make a cute little sign for her. I didn’t think about it until now, but I hope Doodles doesn’t dig her up.

I’m kind of having a hard time with this. I’ve never had a dog die before. I am sad. I wished I could have been there to hold her in my arms as she died so she would feel comfort. I wish I could have watched Melon Man bury her. But, I was here and they were there. There was nothing I could do about it.

So, I kept working. I finally left work to head to the park for our department outing. I got there and drove around and around looking for a parking spot. Long story short – there were none. So, I left for the airport. I love how green it is here.... 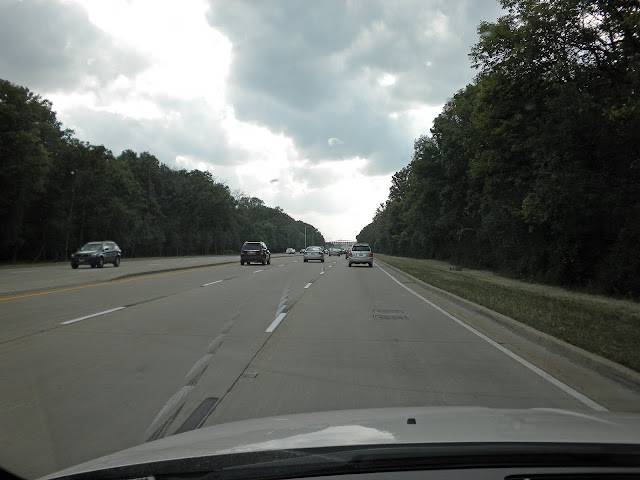 I turned in my uber-cool rental car - this Saturn Outlook - and headed for the terminal.  I loved this car!  I think I might enjoy having one someday.  I normally don't like leather seats, but this was one really nice car.  Kind of like a small SUV/matured and improved station wagon.  It was really fun to drive.  I loved using the bluetooth feature that was built-in too. 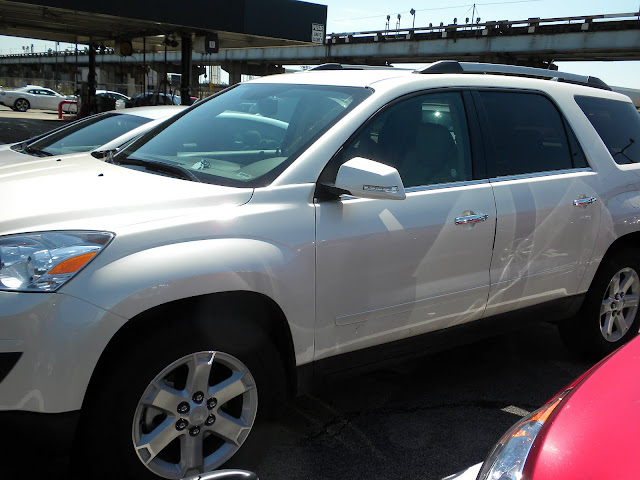 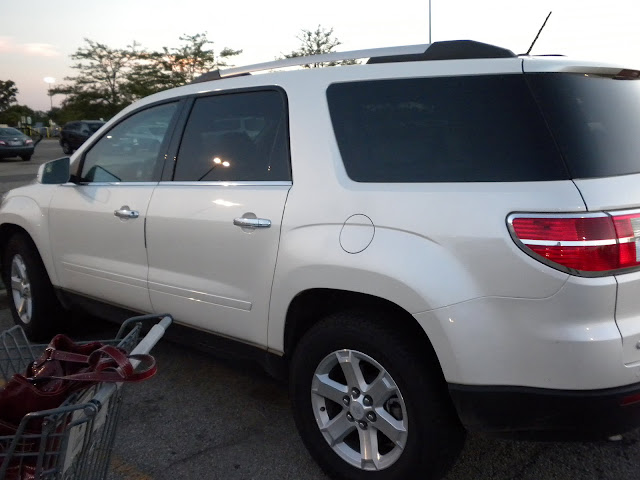 And so it was…it’s now 7:45 p.m. and we’re still here. Still sitting here in the humid airport sweating and waiting.  All of the ground crews have been pulled inside.  The rain is coming down in sheets.  Our plane, which was coming from La Guardia, has been diverted back to Indianapolis.  Our crew, on another plane, has also been diverted to Indianapolis.  We're still sitting here.  Waiting.


I did make a “friend” today though. Here he is. He was sitting next to me the whole time we waited. He’s not had a good 24 hours either. He lost his wallet last night – with all his money and all his ID. He hasn’t eaten all day. I bought him a hamburger and drink. He ate the last of my chips and salsa from Chili’s. 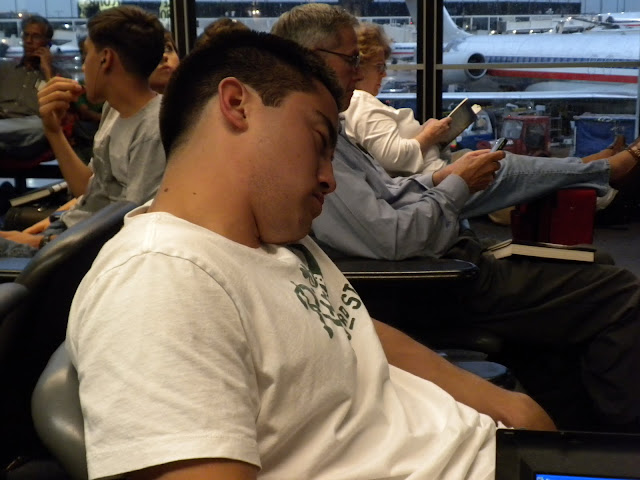 We’ve laughed and talked through this whole thing.  I've told him about my little blog here and given him the nickname - Taxi - since that's where he lost his wallet.  If only I could actually blog rather than just typing this on Word so I can upload it later...um, yeah, what?  One of the largest and busiest airports in the world and they don't have FREE wi-fi?  That's right...it's just "available" wi-fi (i.e. $9.95 per day), not "free" wi-fi.  Um, whatever. 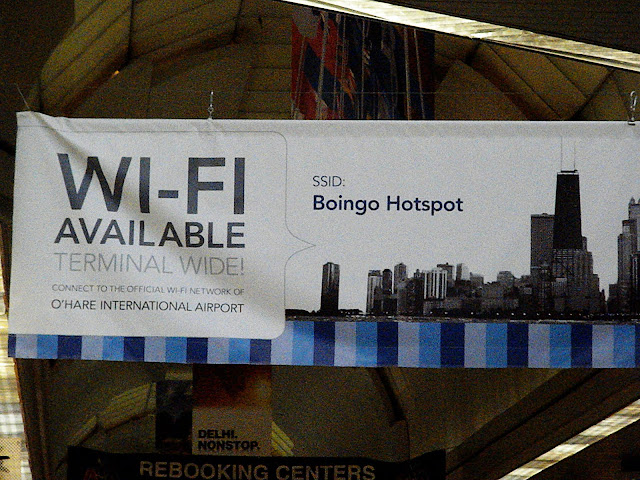 Finally....another update about our plane...


As always, while sitting in the Chicago O'Hare airport, I've seen some very interesting folks.  I always try to take pictures of the interesting ones...not the freaky ones because that would be kind of mean and judgmental...although what I just called them was judgmental anyway and that was wrong of me.  They are just different and free-spirited and have chosen different paths in their lives, I guess.  Free agency...that's what we were sent here with, right?  Anyhow...here are the pictures of the folks that just kind of caught my eye this time in this grand melting pot of an airport... 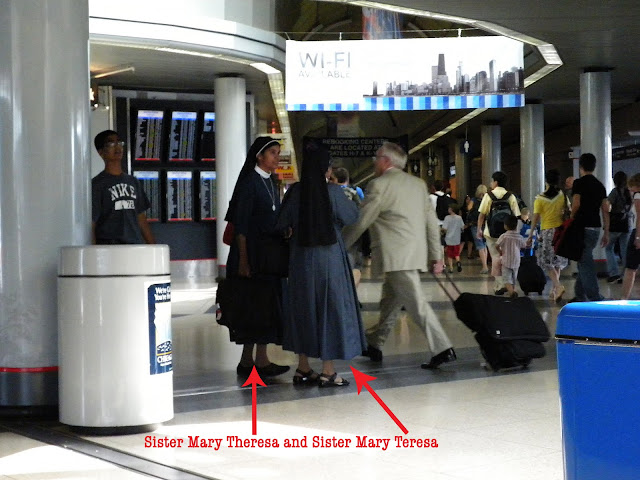 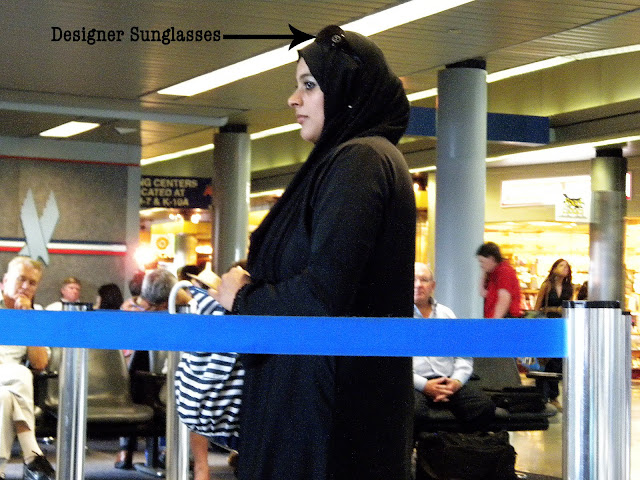 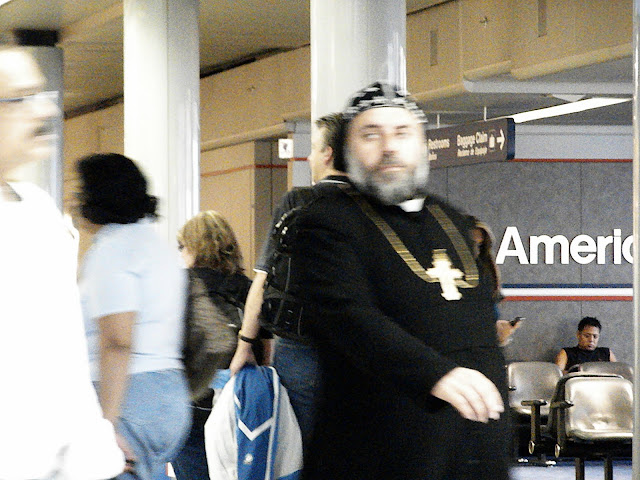 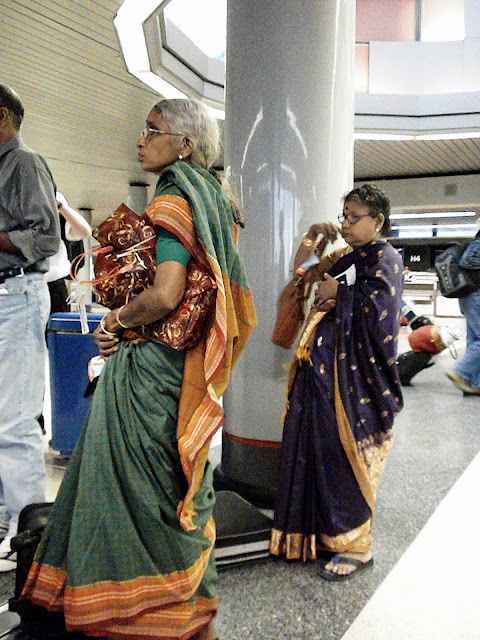 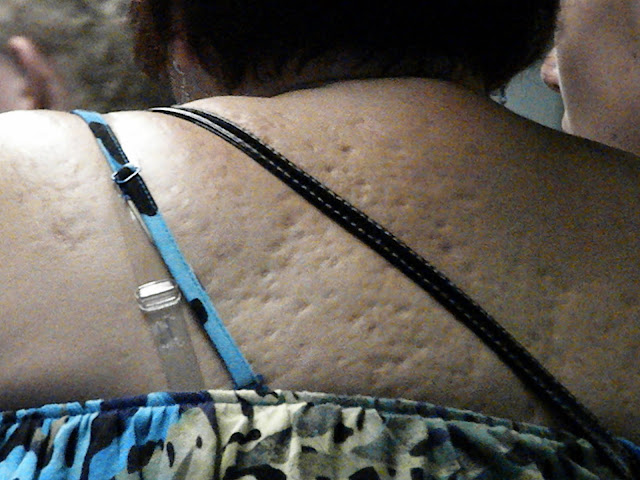 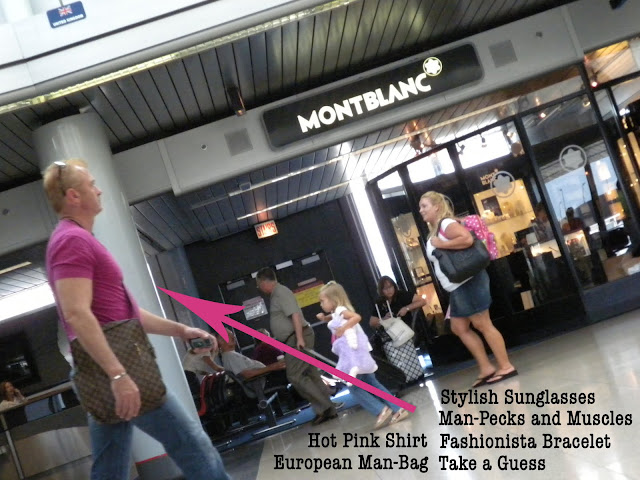 So, we're sitting here waiting for the flight to get in and what happens?  Some dude comes running up to the gate and gets all ticked off because he isn't being allowed to get onto the plane he was supposed to take. Well, let's see dude, they tell you they are going to start boarding 30 minutes before the flight is supposed to leave and you run up at the moment they are getting ready to back away from the terminal?  Um, yeah, they're not going to pull back up to the jetway and open the door for you!  Guess you should have spent less time in that restaurant...or on your phone trying to look important...or whatever... 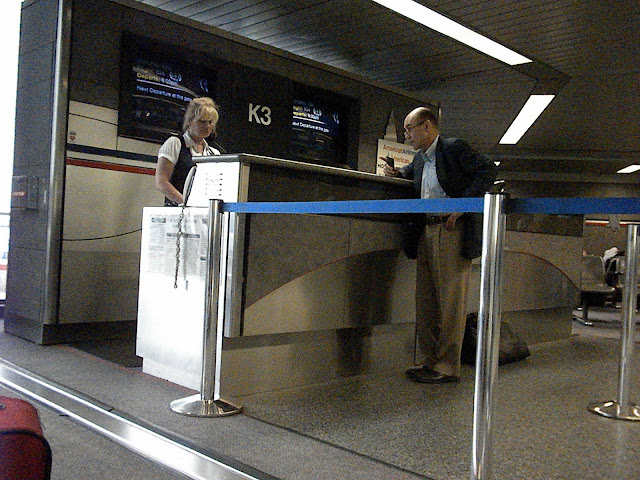 Anyhow, here he is yelling at the gate agent telling her how he's going to contact the president of American Airlines, yadda, yadda, yadda.  Whatever.  I just thought it was rude the way he was pointing at her and such. 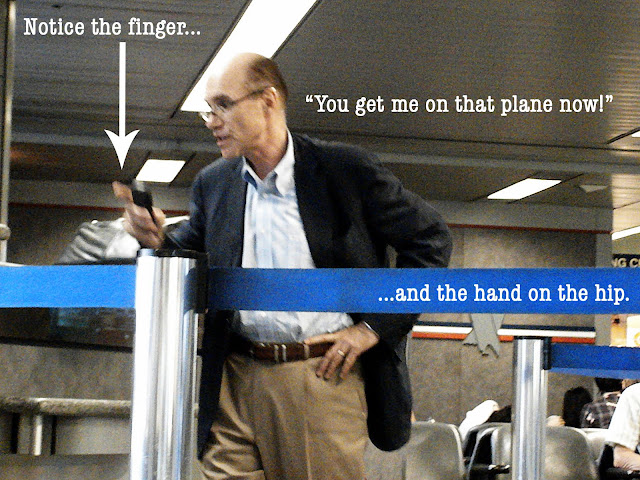 Then, this other goofy looking agent with his bright florescent orange glasses pops over and just lets him keep railing on her and then walks away. 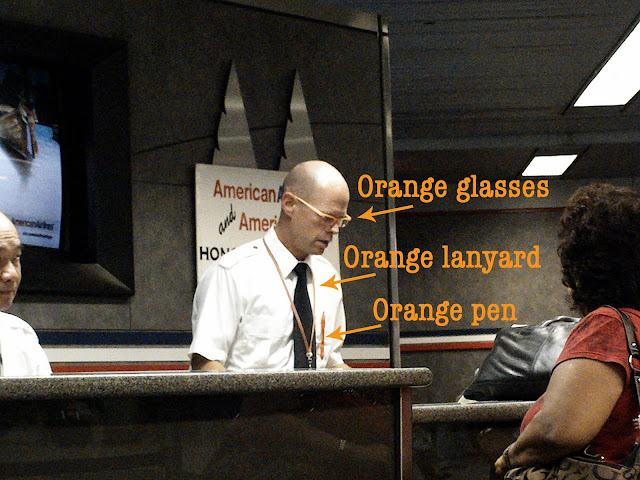 Great...they just changed our gate...to "No Gate".  What exactly does that mean?  Do we sit here?  Do we wander around?  This is crazy.  I hate airport delays. 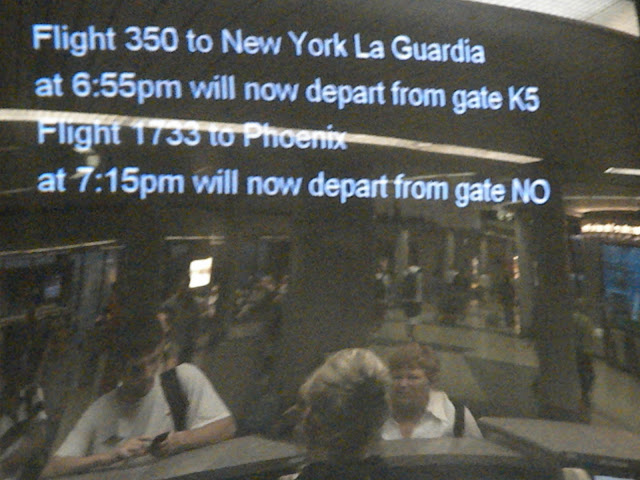 Finally, we have a gate - all the way down at the end of the terminal...just like usual.  Never anything close by.  So, we hoof it down the terminal and on the way I stopped and bought a few carmel apples to take home.  They just sounded good.

Soon, our plane arrives and we now get to board.  Finally.  I'm kind of honery right now.  I'm tired and I just want to get home.  Home to a less humid heat that won't suck the literal life out of me.  Home to 110 degrees, but yet, my skin won't leak sweat just walking to the car.  Home to my super plush bed.  Home to my Melon Man and home to my remaining two dogs.....it's certainly been a long day and week.

I feel your pain. Been there, done that at O'Hare. It's worse when you are trying to get home because you have had a death in the family and you miss your connecting flight by one minute. That's what happened to me four years ago. The plane hadn't even left the gate and they wouldn't let me on. And, oh, the humidity in Rhode Island is just like Chicago. This has been one of the worst summers I have experienced since I was pregnant with Sarah 19 years ago.

So sorry to hear about Miss Pooh!

Holy Moly, what an event to get home. Loved the lightening video!

So sorry about Little Bit. It is hard to lose a doggie.